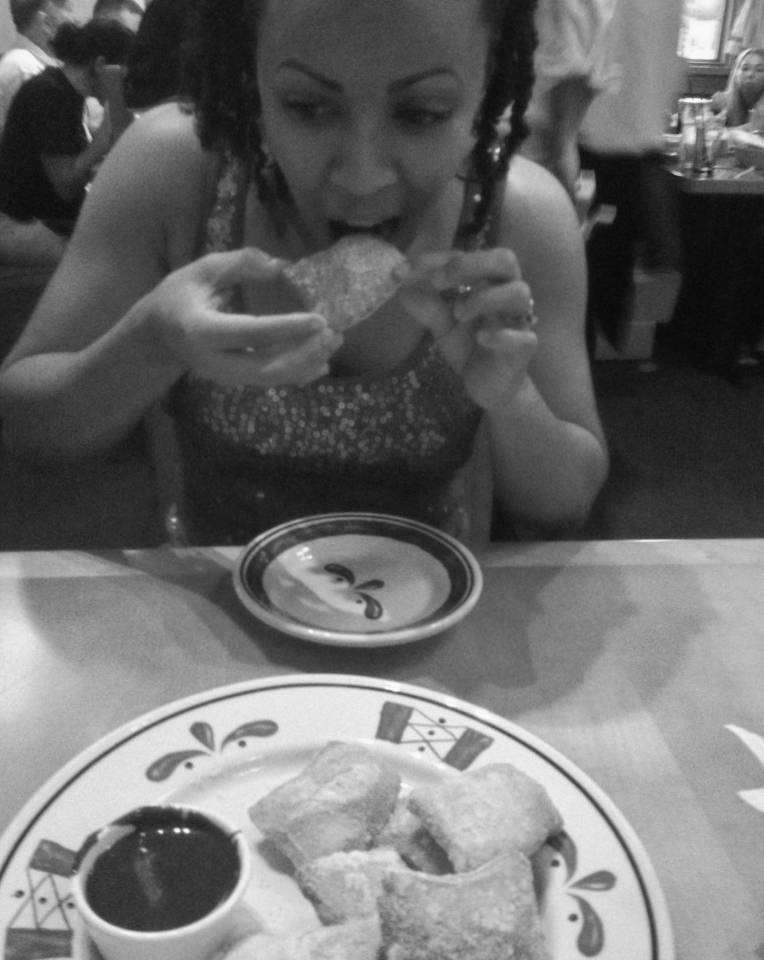 Is EM2WL an excuse for gluttony? (battling muscle loss with age)

Q: Why do you want be able to eat so much? Why would a woman purposely go through “bulking phases” trying to gain weight for the sake of adding muscle? I mean, you are a woman, why do you want to eat like a man and look like one too? Just sounds like gluttony to me. I'm completely content eating less than my husband, and having less muscle.

A: I'm sorry that you see it that way, or that I come across as a muscle-bound “glutton” to you. It's not just to be gluttonous …OK, maybe a little, lol…but more so because I know how much our metabolism slows with age. Weight goes up, muscle and bone mass decrease, and we have to eat LESS just to accomplish the same results. Everything that I do, is to DEFY that trend. So my aim is build as much muscle, and eat as much food as I can now. Then, when I get to the age where my peers are hardly eating, getting “softer,” and at higher risk for bone/muscle loss – I can still enjoy my life and have enough bone/muscle/brain strength to have as much independence as possible. This is very important to me, as I watch my own grandparents age and lose all independence. I am a very “future” focused person, in case that isn't obvious.

I just grew up originally thinking (as did my grandparents) that the changes we deal with as we age are inevitable. While some of them may be – and we will never be immortal – studies are proving that much of what we've attributed to “the effects of aging” over the years, are simply the effects of being sedentary. I WISH my grandparents only had known that they needed only to eat a bit more, move a bit more, and lift a little weights. Heck, I wish they'd even try a little now. I watched them give up at the first sign of “aging” almost 20yrs ago! My grandpa plopped on the couch in his late 50s and basically said “that's a wrap, I'm too old.”

Unfortunately, he has stayed there WELL into his 70s.

Grandma has followed his lead and she's still in her 60s. It makes me so sad. I don't expect them to be flipping cartwheels or anything, but they've incurred more muscle/bone loss since they STOPPED moving/eating, than they had up until that point. I didn't think they had a choice, but now that I devour studies on aging, I hurt knowing what they don't. It's tough to know, yet not be able to say anything out of fear of being disrespectful. But all of the kids/grand-kids talk. They talk to one another about how much it hurts to see Papa just decide that he's “done” and constantly reference his mortality when we are with him. Its very depressing. I mean, if you still have to be here, why not try to make your life the best it can be?

But, that being said, I do know that a lot of people believe that if they are comfortable with their calorie intake/level of muscle now then why bother? On some level, I get that. Without the long term aspect in mind, it does kinda seem pointless to some people to raise their calories/build muscle if they feel “satisfied” now. My issue with that standpoint is that what satisfies me now, may be too much 10 years from now. So if I'm already eating a miniscule amount, it will need to be decreased even further. The muscle that I have now, if left as is, will be but a fraction of the current amount, when I need it most. So, for me, it all comes down to being safe rather than sorry, and getting those calories and muscle mass to a decent level…now. 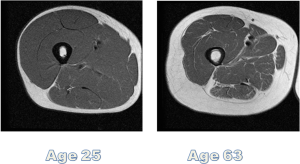 MRI cross-section of a male thigh – notice how the muscle/fat ratio changes as the decades pass? Males carry MUCH more muscle than women.

How about you? Do you feel that EM2WL is just an excuse for gluttony? Is it greed to want to eat more, when your body has adapted to a smaller amount of food? Should women leave the “muscle building phases” to the men?

Compound vs Isolation Exercises
THE METABOLISM RESET GUIDE
Why am I not getting stronger?