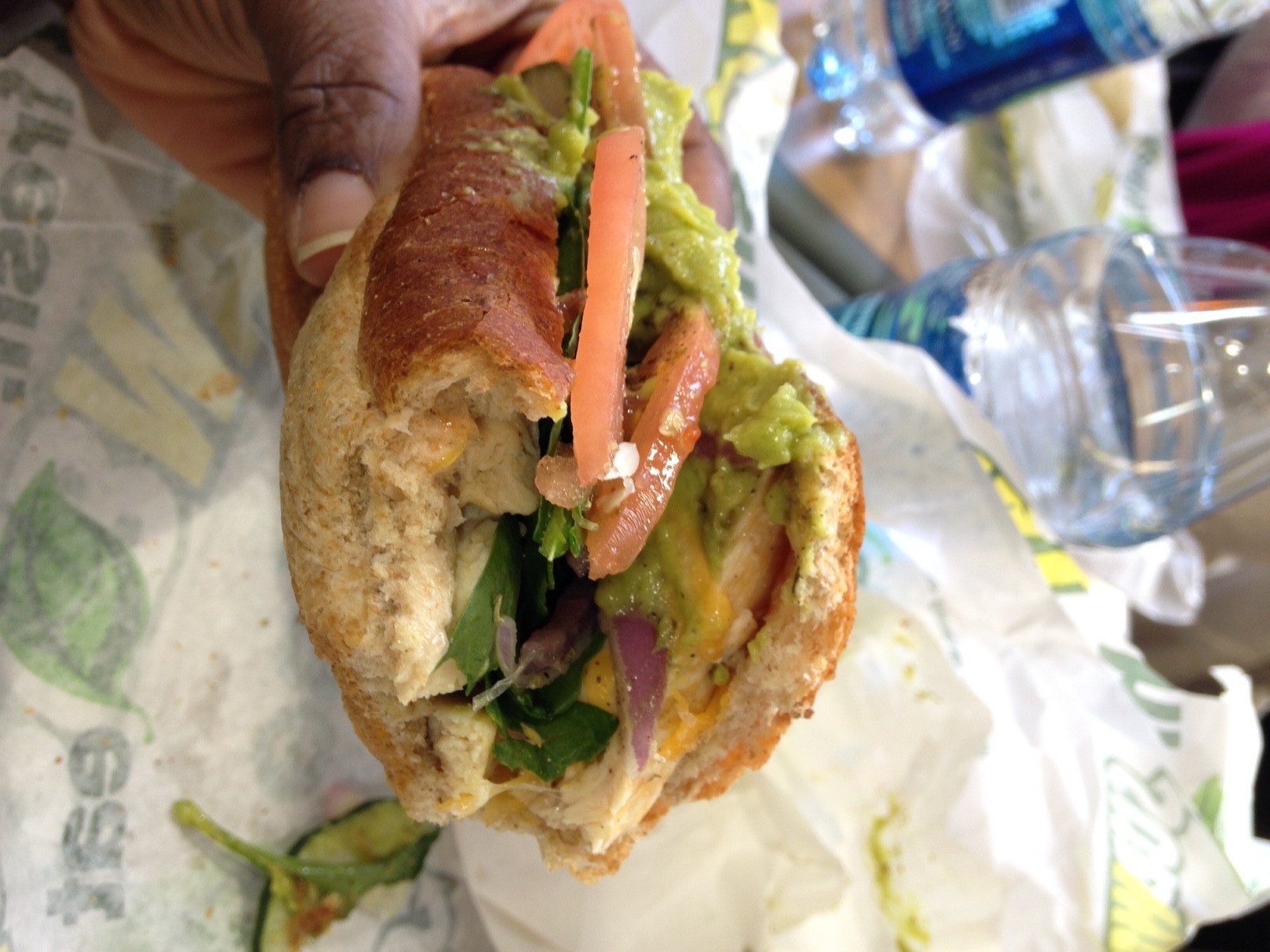 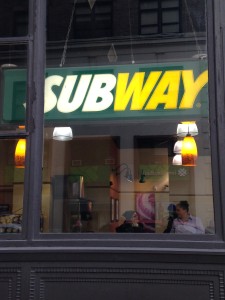 My Saturdays start with my 8 year old daughter and I heading down to the garage to our home gym.  While I train, she constructs some sort of obstacle course out of whatever she can find.  As far as she is concerned, the wackier, the more awesome it is and I mean anything goes – box, bucket, umbrella, shovel, etc.  If she can lift it, it's fair game!

Once finished, the family is out of the house until early evening.  As you can imagine finding healthy convenience food when you're on-the go can be a challenge. But, thanks to Subway, finding eats that fit your lifestyle just got easier! Last week I had the opportunity to sit down with other FitFluential ambassadors and Subway's corporate dietitian, Lanette Kovachi who oversees the nutritional information of menu items, to discuss exciting changes happening to Subway's menu.

One such change is Subway's new and improved grilled chicken. I actually had never eaten a grilled chicken sandwich at Subway, so I was quite excited to try it out. Since it was my first time, I thought I would go all in and have the Monterey Chicken Melt. Sounds pretty indulgent right? Well, I was pretty surprised to learn that my splurge had less than 400 calories AND packed in 29g of protein. Boo-yah!! Being the HANGRY girl that I am, I doubled the meat for even more yumminess. Yeah baby! 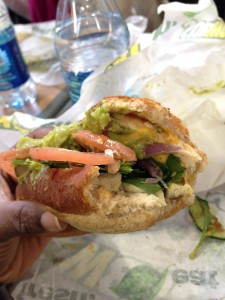 Subway sandwiches are made to order, so I opted for the 9 grain wheat bun which is made with more than 50% of whole grains and has 4g of fiber for a 6-inch serving. Then I added cucumber, red onions, tomato and avocado. Delicious! The grilled chicken can be served on a bun, like mine, on flatbread or on top of a salad. Here are some reasons Subway's grilled chicken sandwiches and salads are a great option:

For the most part, I prepare and carry my own food with me, but that does not always work out, especially when you are more often on your kids's schedule rather than your own! And finding protein is always a concern when on the run.

My girls have been subway fans for a couple of years and now mommy is one, too. Not only is it great tasting, it checks a lot of boxes on my nutrition list.  If you haven't tried the grilled chicken yet, do it! 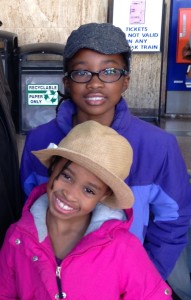 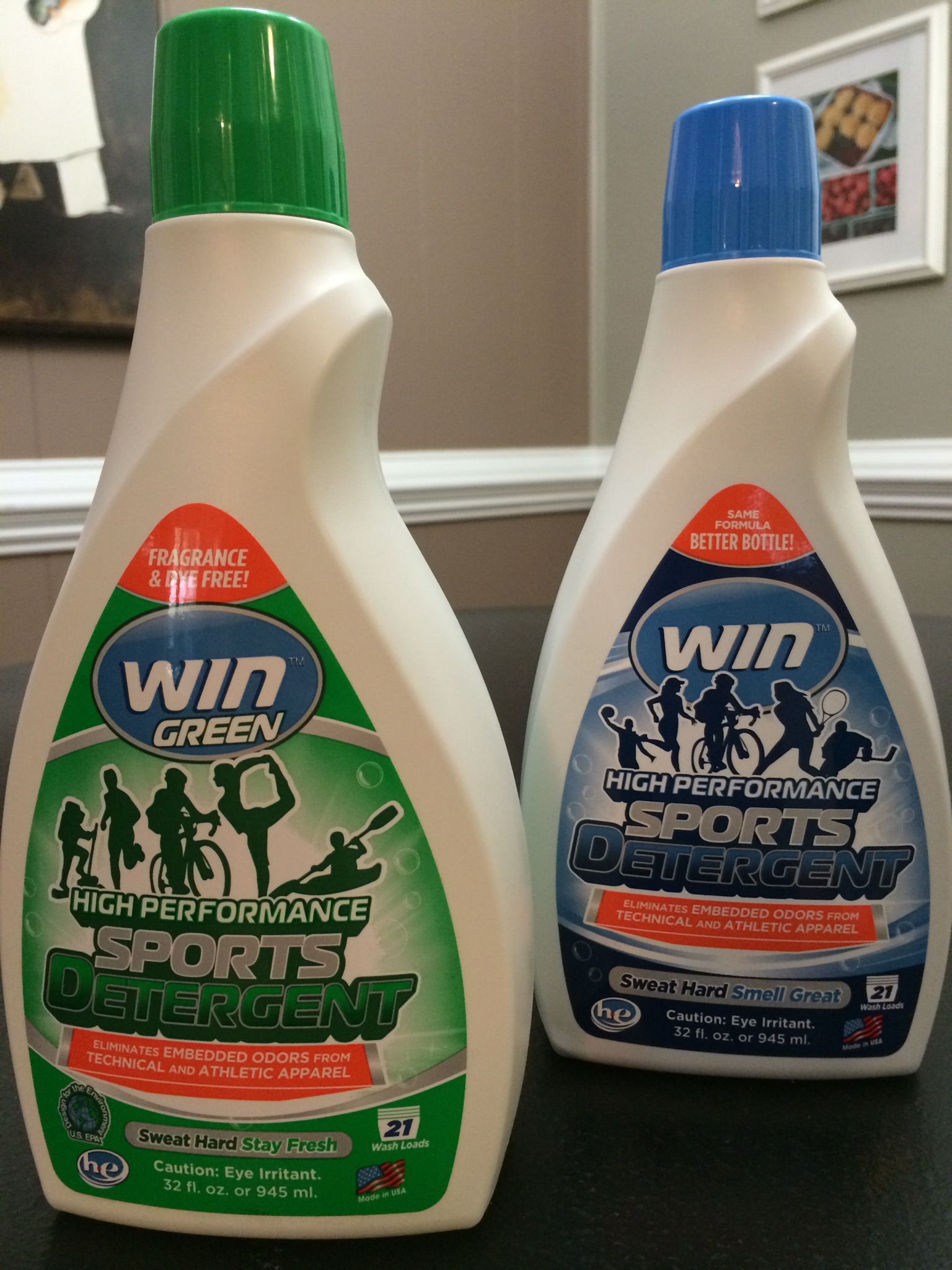 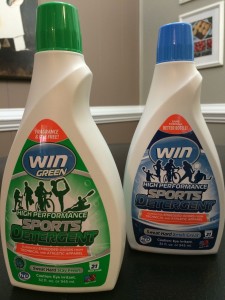 I recently came back from another extended vacation to the West Coast and — after picking up all of my accumulated mail from the time away (and crying over a few expired coupons/offers) — I was excited to see that my WIN Detergent samples had arrived while I was away!

As a Fitfluential ambassador, EM2WL occasionally gets some goodies to review – and this one came right on time for me.  Granted I didn't get bombarded in Reebok apparel and romp through the parks of NYC like Trish, but hey EVERYone has to do laundry at some point right? And we are talking to pretty decent sized bottles here, that are made for getting sporty smells out of workout clothes.

I will say that our household certainly gave WIN a run for it's money, lol.  As a personal trainer and avid exerciser I definitely contribute my share of smellies to the laundry pile.  Did I mention that I workout at home — in a converted garage — with an AC that only works if I remember to turn it on 30-60 minutes in advance? :P

But my own sweatfests aside, my guys also use the home gym in the evenings…long after I've turned the AC off again.  And if I can barely remember to turn the AC on in advance, you can only imagine the sweatbox that they workout in. Ick.  Hubs also works in construction.  Technically he owns the company, but apparently that doesn't stop him from wearing construction adhesive, sawdust, dirt, and sweat like the latest fad.

And oh yeah, there's the kid.  He's 17.  Plays basketball all.the.time, bathes/showers/get dressed “as needed” – especially in the summer. Double Ick. Did I mention he's 17? Yeah…so laundry gets done like…the day after never.   BUT, the kid pays top dollar for all of his athletic apparel, and LIVES in it.  Seriously.  Eats, sleeps, and even swims in basketball shorts.  Apparently, mesh (or whatever those shorts are) are the new denim?

Anyway…with all that said, I was pretty interested to see how WIN would hold up to the test (especially of the basketball stuff that gets washed who-knows-when?).

My usual detergent is ALL Free & Clear, and though we have the occasional sample of GAIN (my MIL is addicted and always trying to convert us), that's the basis of my comparison.

So first things first: smell.  WIN (regular) had a great light/fresh scent, while the green version had no smell (as expected).  The scented version was not so perfume-y that it would merely cover up the “funk,” and it really left a pleasant after-smell once the clothes finished washing.  Considering how bad a monthly – if that – washed laundry pile in a teen boys room can smell, this is no small feat. 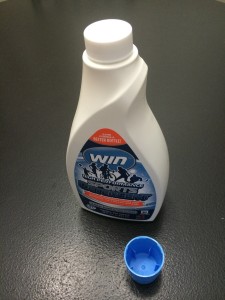 The smell of the laundry before did not disappoint (for testing purposes) and the smell after was actually rather pleasant for the scented version.  The after wash smell of the scent-free version was simply a “clean” smelling pile of clothes, pretty much comparable to what we're used to with ALL.  They didn't stink, but they weren't a bed of roses, lol.  Although his every day apparel is basketball clothes — and he does plenty of activity in them —  I'm thinking that this would be an even better trial run next month when basketball season starts back.

Of course the next question would be: did they actually come clean?  Well, we weren't dealing with any really tough stains or anything, so I can't vouch for any special “stain fighting properties”– though I don't know if that's even a WIN claim.  No dramatic brightening or whitening, but I was also washing mostly darker clothing (reds and blacks are the kids staples).  No colors were faded, which is a huge plus because our household is big on that (I also don't put certain items in the dryer, which helps of course).  But I can say that I didn't notice anything really go in dirty, and come out looking as if it had never been washed.  It cleaned pretty comparable to what we're used to with ALL.

Packaging.  I'm assuming that the newer bottles that I was sent are an accurate representation of what would be on the market.  I thought the shape/design of the bottle and labeling were pretty cool.  The bottles were easy to maneuver and pour for someone with smaller hands like myself.  I love that you can pretty much look at the label and understand that it's a sports detergent.  Also the allergen-free bottle being called and colored “green” makes it obvious for marketing to specific population needs.  My only issue with the bottle design, was the the multi-layer cap.  As with most detergent bottles, the cap is the measuring cup.  Only in this case, there's a cap under the cap — so one screw-on cap, and one that sits atop that one.  The measuring cap only fits with the screw-on in place, or it would simply come right off without it.  When I'm in my laundry zone, I just wanna uncap, pour, recap, and go.  Not uncap, unscrew, pour, rescrew, recap, and go… 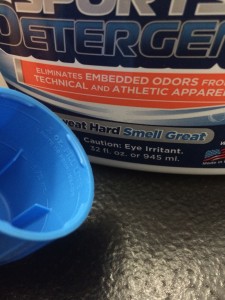 The other issue with the cap (and this is true of other detergents as well), is that the recommended amount of detergent to use exceeds the amount that the cap will hold.  With the recommended minimum being 1.5 oz (see label pic above), you need to use one and a half cups per load.   Not a deal breaker, of course, but I just don't get why manufacturers do this.

All in all, I would say that in my brief trial (about 2-3 loads with each detergent), WIN is definitely a win.   The ability of the detergent to high perform as promised, more than outweighs the awkward cap issues.  Currently going for about $10/bottle on Amazon, you'd probably look to use WIN to supplement your usual laundry stand-by, allowing each laundry to do what it does best.  I still have an econo-sized container of ALL left,  so I'll be using it up for our regular scheduled laundry.  But I'll be breaking out the rest of my WIN samples next month when my son's basketball seasons is back in all it's full (smelly) glory. 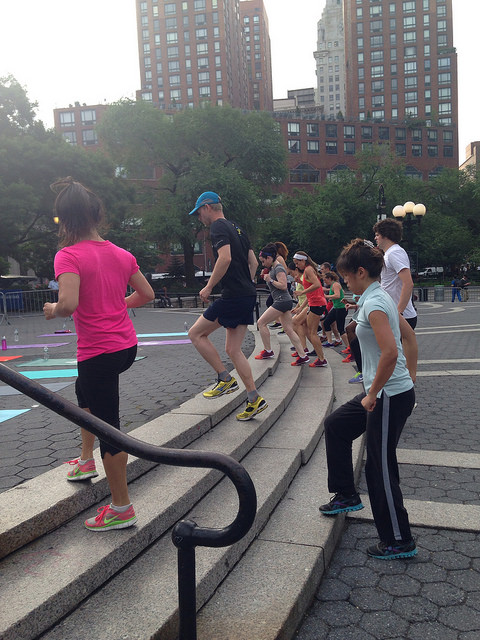 CrossFit in the Park 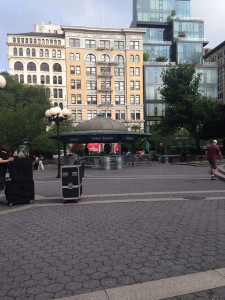 The following post is sponsored by FitFluential LLC on behalf of Reebok.

Last week I had the awesome opportunity to check out Summer in the Square, which offers a series of outdoor fitness classes and other free events held in NYC's beautiful Union Square park.  The park, best known for NYC's oldest Greenmarket,  is amazing with its many statues and greenery.  With all the hustle and bustle going on around the park, it was the perfect setting for an equally energizing, sweat session.

Make no mistake, just because we weren't in a gym, the WOD was still super challenging using just our body weight.  The class was led by two impressive CrossFit coaches, Jay Adams and Christina Gryte, providing great cueing, demonstrations and kept the motivation on high throughout the class.  Much of the class had no CrossFit experience, myself included, but you would never know it and that is thanks in part to the two of them. 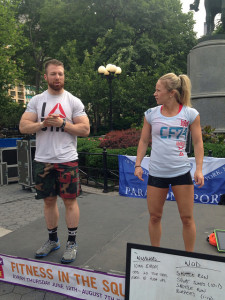 The hour-long class started off with a warm-up WOD which consisted of 10 minute toe-tap/push up intervals.  By the time it was over, we were all good and sweaty and ready to get down to business.

If we are connected on Myfitnesspal you may have heard me complain about my knees in the past and have all but sworn off any type of high-impact exercise.  Because this was my first official CrossFit class, I wanted to give it my all and get the full experience which meant making the fewest modifications possible.  I even had my right knee taped by my physical therapist the day before. 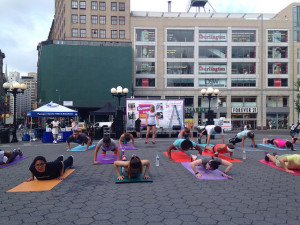 Well, I must say that I actually impressed myself with how well I performed on the squats jumps, completing all rounds without any modification.  Even afterward, there was no delayed aches and pains which I was totally anticipating.  Although I'd like to take the credit, I have to give credit where credit is due – the Nano 4.0.

Admittedly, this was my first time wearing any Nano so can't compare them to previous versions, however, I can compare them with my current trainers and the Nano surpassed them in the areas most critical to me – stability, cushioning and shock absorption.  And all of this on cement no less!!  Additionally, it was a very humid day and while the rest of my body was drenched in sweat, my feet stayed pretty dry – another plus! 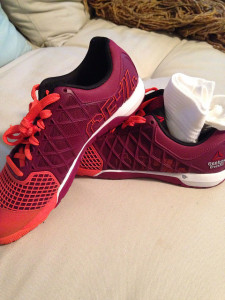 If you have the opportunity, get out of the gym and get into the park for this great CrossFit class.  The classes are free, don't require any existing CrossFit experience and are going on throughout the summer.  While you're at it, check out the Nano  4.0!  Locally you can grab them from Paragon Sports or visit reebok.com.