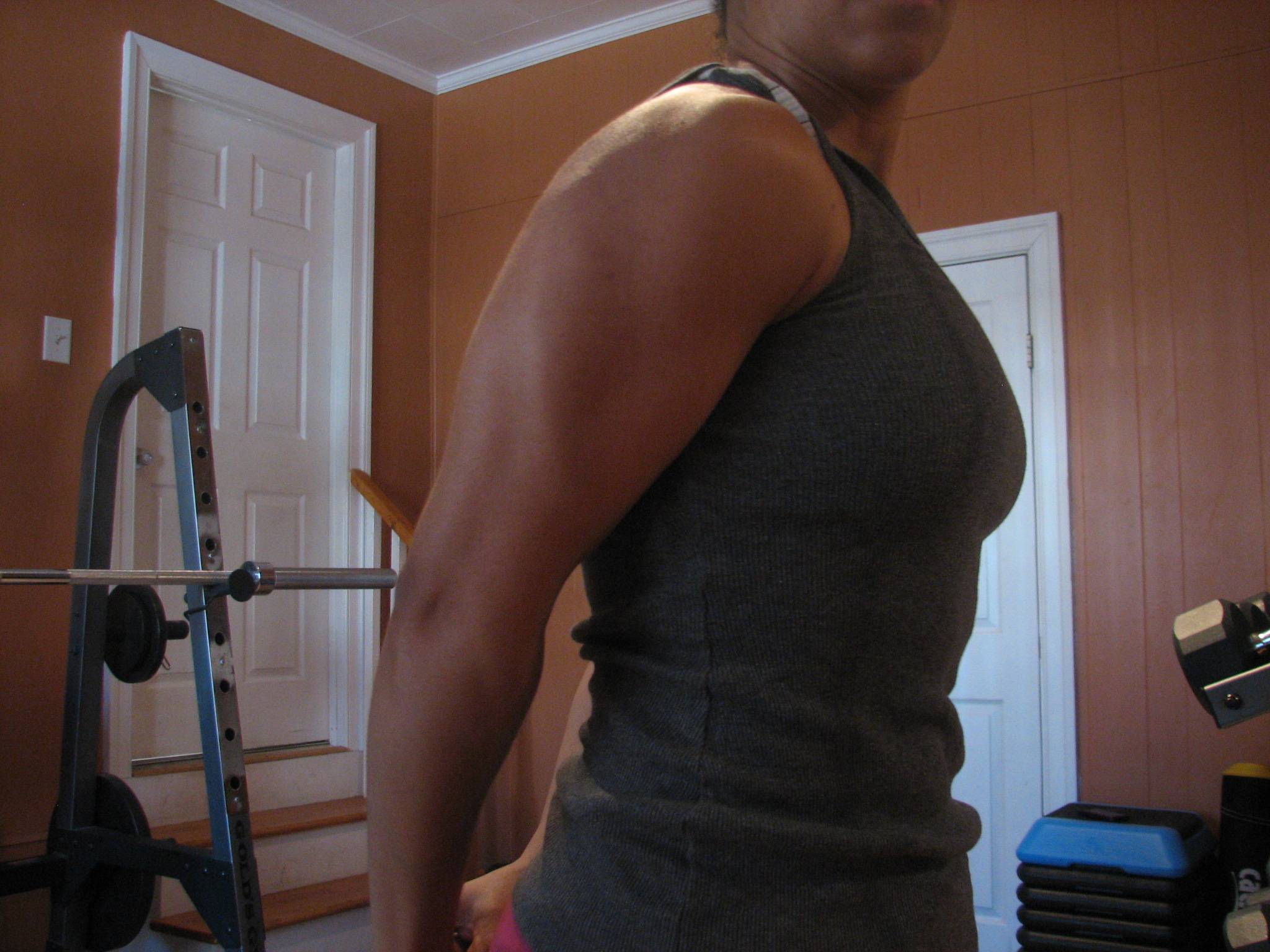 Weight Lifting For Women – My Arms Are Getting Bulky 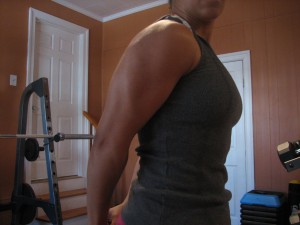 Q:  So I've been on a bulk, to put on more muscle on my arms.  I'm lifting HEAVY, and my arms are gaining size, but now DH says I have “man arms”…are they supposed to be big like this? I know dumb question. They are not that cut yet but definitely when I flex you can see and feel something big there. Will I get more of a cut and defined look in them?

A:   Right now — since you're bulking — they may seem bigger.  Although you know there's good muscle under there, the muscle lines are probably smoother (not clearly defined)?  Is that what you're seeing?  If so, that's perfectly normal.  You are building muscle and eating to support that phase — which likely means a bit more carbs, and the water retention that comes with it.  This will even out again when you start to cut and eat to support that phase.  But, since the two use opposite eating techniques, you're on the right track.  The more muscle that you build, the more is left behind when you cut.  With weight lifting for women, it's very hard for women to put on (and keep!) muscle.  So don't fret too much, and tell Hubs that it's all part of the process.  The softness is typically more prominent if we start our bulk at a higher bodyfat percentage — because our muscle starts to come up under a layer of fat, pushing the fat outward (making it more visible).  It worries us because we think we're getting too bulky.   But when the fat sheds,  you're left with a lean and tight physique because of the muscle you built.  This trumps simply getting smaller, but still looking the same “per capita” (as my husband likes to say).

That explains why I choose to do my bulking in the cooler months.  Because when I get to the phase that would make me wanna slash my calories and run for the hills (or the elliptical),  I can just cover up and train,  satisfied that no one knows what's going on under there (other than Hubs, lol), and by the time they do…I've got it all together, again.

A:  Short answer?  Build until you can't take it anymore/clothes don't fit/Hubs thinks you're fat/create your own reason, then cut.

The concept of gaining any type of weight on purpose is just unheard of these days.  This is why I LOVED the old Oxygen mag issues (from beginning up until the early 2000's) — they discussed this concept freely, so you knew what you needed to go through in order to get the results you wanted.   They didn't just show you pics of ripped models and say “you can have these (abs, arms, legs, etc) in just FOUR weeks!”   They gave you a workout routine, but they also gave you the stats of each model.   They told you her age, height, current AND off-season weight.  Did you get that? OFF season weight.  That's the crucial part.  Most people don't understand the fact that those women only look like that for their photo shoots or competitions.  They look like normal women the rest of the year.  Each competitor snapshot would ask the woman how long her bulk or cut phases lasted and what exactly that woman does to bulk/cut.  It was priceless.  It only took reading through those a few times in order to find someone with similar qualities as you, get a good idea of how long you need to put into each phase, and what to expect in your “off” season (bulk/maintenance).

This is still especially good info to know, so that women don't panic and go back to a never-ending diet.  Women have now been led to think that they can just pick a random routine and look like the ladies in the mags that took YEARS to pack on enough muscle to build the physique that we see.  They want the cover model physiques, but are so sensitive about weight gain, or clothes fitting too tight — not realizing it may be the exact thing they need (temporarily) to get the physique they crave.  It's frustrating.

Most competitors/fitness models have an off-season.  WE JUST DON'T SEE THEM during that time.  But if we look hard enough, we will notice subtle changes in their body depending on what they've been doing.  We can also see that when doing any fitness instructor's class or videos, her (or his) body is always changing.  Sometimes the muscle is really defined, sometimes it's not.  The same holds true for any fitness pro that we look up to, maintenance is really a myth, our bodies are always changing.  Basically there's a difference between this:

See what I mean?

Being consciously aware of this and going through muscle building (bulking) phases as needed, makes sure that your physique stays in the general vicinity of what your ideal is.  If you never specifically attempt to build muscle, you will likely lose some as years progress.

FYI- the process becomes less noticeable after you repeat it a couple of times.  You will be able to stay in build (aka EAT) mode for longer, before it gets…uncomfortable.  You will becoming leaner, with a lower bodyfat percentage to layer over the muscle.  So it's an ongoing process…build until you feel fat, cut until you feel lean enough, maintain until you feel like you're losing muscle tone/want to put on more muscle.

Guest Post: How I made the EM2WL lifestyle work for me
5 Workout Tips for Preventing Plateaus
10 Tips for a Knock-Out Cutting Phase