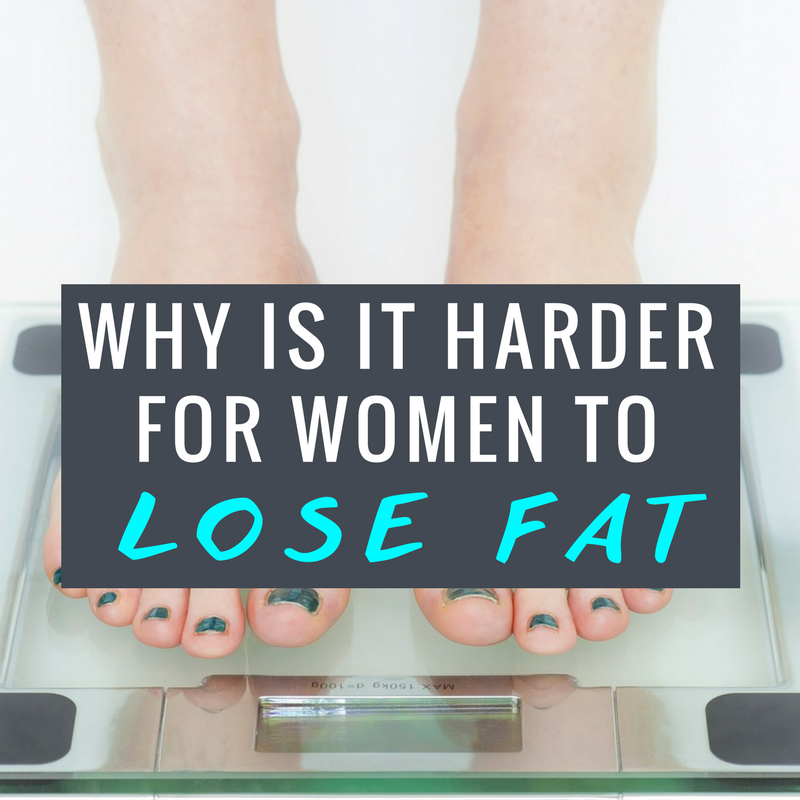 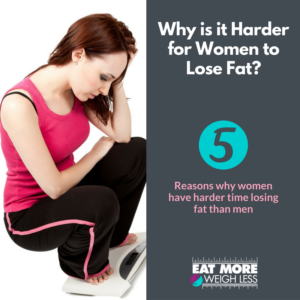 It's not your imagination.  Women have fat loss struggles that seem to elude their male counterparts. Many of us have been known start to the “hey let's do this diet together” – only to end up frustrated when we plateau and they…don't.  Of course this is an oversimplification of gender (not all men lose fat super easily — but dang it sure feels like it at times!), but men definitely have a few advantages over us.

Over the next two articles, we'll explore five main reasons why women have a harder time than men when it comes to shedding the fat.

Women are often more focused on weight loss over fat loss, which means they pay a lot of attention to the scale. And if you're constantly looking at the scale, that can skew what you think is progress. Men tend to not be focused on the scale when it comes to their weight. Most of the time, men just do one or two simple things and the weight seems to fall off of them (more on that later!) By eliminating the need to see a number on the scale, men do not get as obsessed about a certain “goal number” than women do.

You can lose weight in almost any way. You can lose weight by losing muscle mass, or water, or you can even lose a limb and see the scale drop. If the loss is coming from fat, then it actually keeps your metabolism on track. But if that loss is coming from muscle, it's actually slowing your metabolism down, which is what happens to a lot of people.

Obviously we all want to blame gains on hormones and whine “Women have it so much harder!!”  Our hormones are more sensitive to stress than men's hormones may be. So when we add stress into mix, (because let’s face it, we are more prone to stress about things) our hormones actually react in a way that stops us from losing weight. It actually causes us to often gain weight, especially in the belly. Women normally tend to hold onto fat in the belly area, but when under stress this area refuses to let any fat go. (This is referred to as a “Stress Belly”)

Guys may have a hormonal advantage because of their testosterone, but if we keep our stress levels low, we can use estrogen to our advantage, and help trigger the fat loss. Unfortunately, most forms of extreme dieting exacerbate stress – lower calories, higher exercise exertions, constant weigh ins, are all forms of stress which can, in turn make it incredibly hard for women to lose fat, especially in the belly area.

Another HUGE reason for why it's easier for guys to lose weight than women is because of their muscle mass. Women naturally have less muscle. The time our muscle mass is at it's highest is when we are young teenagers. That is, unless we do something about it – unless we choose to actively seek a lifestyle that builds and maintains our muscle mass. We want to see that scale go down because we think the scale is what is going to make us skinny. This typically means that we're not focused on muscle mass. 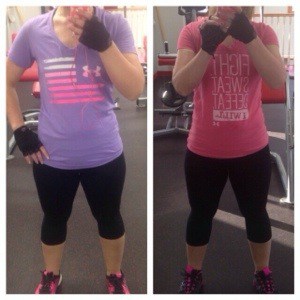 Just like Melanie, you could be losing fat even when the scale isn't moving!

Muscle equals metabolism, so when we start putting on muscle mass, the scale may not move at all, or even go up.  It's mentally tough to put focus on our lovely new muscle gains when that darn scale is going up/staying the same, so this is where we tend to self sabotage.  When it comes to muscle, you can actually gain weight AND look better because the increased metabolism will help you burn fat even faster, burning calories at rest. Muscle is what keeps everything toned and tight and compact underneath your skin. Simply losing weight doesn't do that. If you lose muscle you may get smaller, but you get softer looking. (skinny fat)

Releasing the grip that the scale has on you, managing your stress/hormone levels, and focusing on building muscle mass are three major keys to conquering the female fat loss code.  In our next post, we'll touch on two other ignored-but-critical factors that play a major role in female fat loss.