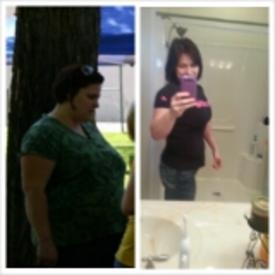 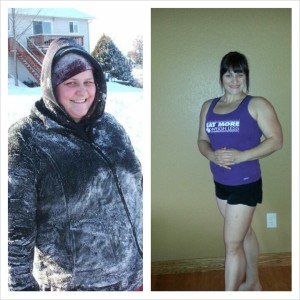 Its been about a year since my update on my experience with eating more.

Its funny how much things can change in a year. My goals have been altered quite a bit in the past year and if you had told me that I'd be where I am today a year later, I probably wouldn't have believed you.

I'd say that the first six months of eating more were really mentally challenging, and there was alot of going back and forth. About a year ago though, I was finishing up my second metabolism reset, feeling great and getting into a really great groove with this lifestyle. I was absolutely confident that I was on the right path. I still had about 20 pounds I wanted to lose, but I figured I would get there, no problem.  As my metabolism reset came to an end, I felt great. I had tackled a lot of my food demons and I was ready to tackle the next twenty pounds and drop some body fat.

What happened next was not pretty.

I decided to meet with a trainer to kick up my training a notch. We researched some local gyms, but given that we live in an extremely rural area in Wisconsin, the choices were very limited. We finally settled on a gym that looked pretty promising. Very few cardio machines. Lots of tires, ropes, kettlebells, barbells. The husband and wife team who owned it were into body building competitions (should have been a red flag!!!!), and seemed to know what they were doing. I really enjoyed the workouts. The trainer we were working with pushed us hard and I felt challenged in a new way. When we started talking about how to accomplish my goals, the first thing he told me was that I was eating too much and to cut my calories.  He also recommended some supplements (which of course, he happened to sell). 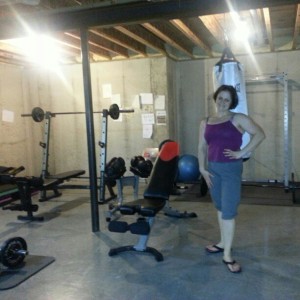 For a while I was able to resist the lure of a magic pill, but eventually I got sucked into some crazy 24-day challenge. To this day, I have no clue how or why this happened, but I ended up gaining like 15 pounds in a matter of weeks.

To make a long story short, I came to the conclusion that wasn't working, and learned a valuable lesson: If it ain't broke, don't fix it.

I knew I had found what worked: lifting heavy stuff and fueling my body for my workouts, and as I returned to that, the weight I had gained left as quickly as I had put it on.  I felt awesome again. I actually feel pretty ashamed I fell for all that nonsense, but sometimes I think we just need to go through those things so we become convinced we were really on the right track all along.

I continued with my cut through most of the summer, but towards the end of summer I was feeling pretty burnt out. It has been a little over 18 months since I started really focusing on weight / fat loss, and I was just kind of tired of the whole thing. It wasn't that I wanted to quit or anything, and I still had/have some big goals for myself. I started thinking about setting some new goals, looking back at some of the goals I had set when I started this whole journey. What I realized was that even though I hadn't reached that elusive number on the scale, I was seeing great things happening. 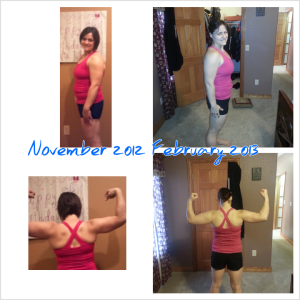 My strength was increasing and I was loving that. I felt fit, healthy, and strong. I was able to run around with my kids and do just about anything I wanted to. I was wearing a comfortable size 6 (which was a huge deal to this chick, who used to squeeze into a size 22). I had made my healthy lifestyle a habit. I just kind of knew that this was my new normal. So what if I didn't reach my goal weight yet? What if I never reached my goal weight but continued to change my body composition? I realized I was okay with that. I kind of abandoned the idea of having a “goal weight.” I still have some body composition goals, but I am confident I'll get there as long as I continue to train hard and keep my eating on point.

I literally took the scale out of my life for a couple months, and it was great. I really just focused on putting good food in, killing my workouts and not really stressing over it. Around the beginning of fall, I started to think about “bulking”, and thinking I would really like to put some concentrated effort into building muscle.  I really did a lot of research and watching this video series from Eat More to Weigh Less was really informative and helpful!

I had a lot of concerns about, the main one being that I was too fat to do this, but I just plunged ahead and trusted the process. I ended up bulking from November to February, and it was great. 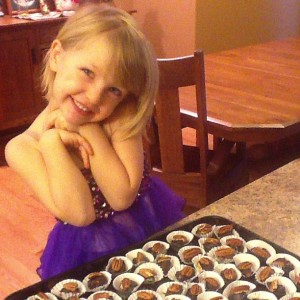 It was really refreshing for my goal to be something other than fat loss. I really enjoyed the holiday season-baking cookies with my kiddos, not stressing at Christmas parties and such.  I had a few bumps in the road-I wasn't always as consistent with my food as I should have been, and I ran into a few injuries that forced me to tweak my lifting schedule somewhat. There were a few freakouts because I stepped on the scale or because my clothes were getting tight.  But overall, I felt like I did pretty well. I was loving my strength gains.  I had set some goals for bench, deadlift and squat and by the end of my bulk, I was totally excited that I had met every last one! It was absolutely amazing how heavy I was able to lift with the extra food-especially carbs!

February rolled around and it was time to begin my cut. This was kind of a nerve racking experience. I ended up cutting only about 300 calories off my TDEE (which, by the way I found to have increased after bulking!).  I had gained about 12 pounds and about 1% body fat. My measurements had gone up mostly in my hips and waist. My clothes all basically still fit, just quite a bit differently and tighter than I would have liked, especially in the legs and waist.

After about 4 weeks into my cut, I am back to my pre-bulk weight, and have lost quite a few inches and some body fat. 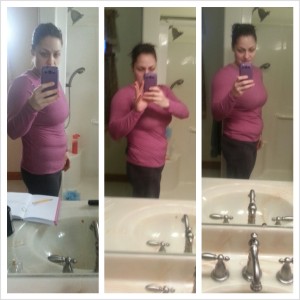 These pics were taken during the first four weeks of my cut. I was thrilled to see some changes in my belly!!!!

I'm back into my favorite jeans, which feels just awesome.

I had been intending to continue to eat at a “cut” for about 12 weeks. Then last week, my hubby came to me with an entry form with a powerlifting meet in our area and told me, “I think we should do this.” Its been kind of a goal of mine for a long time to train for and do something like this, and so we decided to go ahead and move forward with it. It is definitely changing the way that I approach my training and nutrition-definitely will be abandoning the cut for now and eating for strength. I am really excited, and will be sure to be keep my training log up to date.

Becca is a busy wife and homeschooling mother to five children ages 5 to 13. About three years ago, she embarked on a journey to health and fitness that resulted in the loss of approximately 100 pounds. Today, she is a competitive powerlifter and strongwoman who loves ice cream and deadlifts.  As an ISSA certified personal trainer, she is passionate about helping women to get started on a lifestyle of strength and fitness.