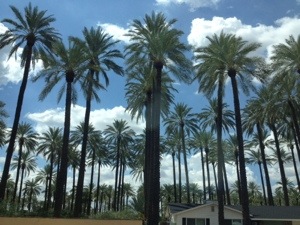 The Stages of True Transformation

Thirteen years ago, my husband and I had a new home built in Phoenix, AZ.  It was during the massive real estate boom on the West Coast and — as first time buyers — we were able to get in it for practically nothing.  The home was triple the size, yet the mortgage was less than rent for the 800 sq ft apartment we'd previously lived in.  By that time, the housing market for that area was a well oiled machine: every new home was built in a subdivision, fully equipped with it's own school, park, community gathering area, the works.  The homes took absolutely no time to put up, either.  From the initial viewing of the model home to closing and having key in hand, took all of three months.  The first day we put the key in the door and turned the knob, we felt that we'd “arrived.”  The home was gorgeous, and we lived it up: entertaining and redecorating constantly.  I lived in my enormous kitchen – going through every page in every cookbook – and even enrolled in an Interior Design course.  We were young, in love, and finally living the American Dream.

Then things took a turn.

Through a series of unfortunate events,  10 years ago, we found ourselves moving back to my dear hubby's (DH's) hometown in VA.  We'd sold our beautiful new home and barely broke even.  We had pretty much sold (or had repossessed) every thing that we owned. 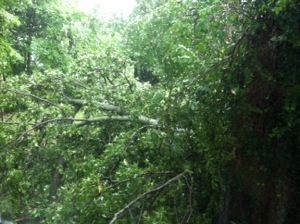 With what little was left, we packed up the kids and dog in a U-haul, and took the three day drive from the West to the East Coast.  We arrived in VA without a dollar to our name, no vehicle, and no home.  About 15 minutes out of the city, we received a call from my Father-in-Law, about a friend who had just moved his wife's Grandmother into a retirement home, and was looking to put her home up for rent.  The home was at best, a “fixer upper,” and at worst, un-liveable, but his wife cherished and wanted to keep it.  Knowing how much work the home needed (and how little money we had) the friend worked out a deal with us for super cheap rent, plus labor.  His plan was to fix the home up, and eventually get a “real” paying renter in, but at least give us time to find a leg to stand on.  The home was an absolute wreck, but so was our life, and we recognized that the opportunity was a once in a lifetime chance for us to dig ourselves out of the hole that we'd created.

We met the guy at the house with our U-haul, and “moved in” that same day.  Everything from the truck went into a garage area, except a mattress that we put down in the one, non-condemned room of the house, where we all slept for weeks.  Eventually I pulled a card table out and put it in that same  room.  That table is where we ate all of our meals, the boys (6 and 16) did their school work (we homeschool), and family puzzles (the home was VERY old, and we were still broke, so no internet/cable connections, etc).  I cooked everything in the microwave because there was no stove, all the food stayed in boxes, because the cabinets were uninhabitable.  DH would work all day, then come home and we'd all work on the house. 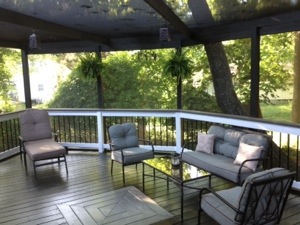 We worked on the basics first: bedrooms, bathrooms, and kitchen.  Bit by bit we got rooms of the house to a point that we could actually use them, and the boys got to move into their bedrooms.  We were able to stop sharing one bathroom.  Every wall in the house got repainted.  Flooring was replaced.  Kitchen cabinets were replaced with ones that could actually be held responsible for holding food and dishes.  An old stove was located and put into good use.  It wasn't Better Homes and Gardens, but we had a place to live that didn't (completely) creep us out anymore, and was actually starting to grow on us.

As we continued to make improvements to the home (at the landlords expense), the value of the home began to rise…and so did the cost of our rent.  DHs income had stabilized a bit, so we went with the flow, because we knew that the home really was worth more than we'd been paying.  We'd come to love the home as our own, and found ourselves doing things to spruce it up even further, just because we began to take pride in seeing all of our blood sweat and tears take shape in the form of what was becoming a beautiful home.   One day the landlord and his wife stopped by to take a look at the home, and the wife, seeing it for the first time in the two years that we'd been in it, burst into tears.  She could not believe the transformation that had been done, and the care that had gone into the home, and asked if we would please buy the home.  She had been dead set on not selling her precious memories of her Grandmother, but she felt that we loved it as much as she did, and she didn't want to see anyone else live in it.  One year later we purchased it. 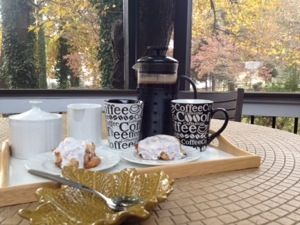 Eight years have since passed and DH now owns his own construction company, and we are doing rather well, financially.  We've continued to make renovations to our home, mostly aesthetic and “fine-tuning” now, as the home is more than liveable.  We've purchased all new appliances, gutted every bathroom, added a massive screened deck (more like a second family room), and that garage that once held every item that we owned, became my new gym (Kiki's cave :D).  Yay!

I.ADORE.MY.HOME. It's not perfect, but it's mine.  It's not brand new like the home I was in 10 years ago, but it's more “home” to us than that one ever was.  Because of all of the effort that we've put into it, it's ours. Bit by bit, one step at a time, for hours, days, weeks, months, and eventually YEARS.  It has become more than we ever dreamed it would be.  There was no specific moment that it happened, not one stroke of paint, or plank of wood, or piece of crown molding that caused the transformation. But years, of consistent love and care for something that we felt blessed to be a caretaker of from day one of our “new beginning.”

True transformation MUST be mental, FIRST. 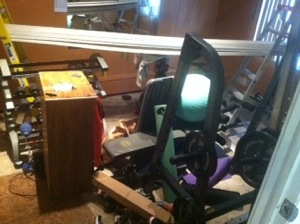 Garage/room that once held all of my belongings

Change is not always fun.  In fact, depending on what brings you to the change, it can be down right humbling.  Many of us come to EM2WL feeling completely broken.  Unfortunate events (perpetual dieting/excessive exercising) have put us in a position that may seem bleak. We've hit a plateau (often literally), come to a fork in the road (“there's gotta be a better way”), or possibly have completely crashed and are starting from scratch (regained all the weight back…again).  Whatever the case, when we face the reality of choosing the EM2WL lifestyle, it can almost seem like that day my family arrived at our “new” home.  Facing the truth of where our “methods” (albeit well-meaning) have led us, can be cruel.  However, staring the results of our decisions in the eye, we have two choices:  decide to step up to the challenge of making it right, or sit, pout, reminisce, and wish that we could turn back the hands of time…

Either way, the time will pass.

Step up to the challenge.  Make things right.  Love yourself enough to make the best use of the body that you have NOW.  It may not be perfect…or the way that it used to be…now…or ever.  But it can be better, and serve you and your family in more meaningful ways than the old version of you ever did.  You can be stronger, more confident, and more amazing than you were before.

You will likely realize, just as I did with my home and my physique, that you love it even MORE.

Don't allow yourself to linger too long on what “was” or how you “used” to look.  You may be blocking something even better from emerging. Bit by bit. Day by day. Put in the work.  Stay consistent. Live your life.  You have the time (even if you think you don't – you do).  Weeks, months, and years will continue to go by, and one day you will look in that mirror.  And the woman looking back at YOU will burst into tears at the TRUE transformation that has happened. 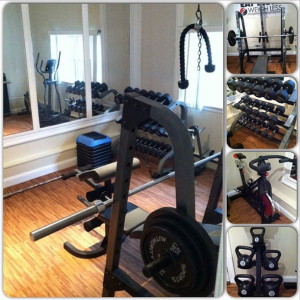 Kiki's Cave! The final (for now) renovation. (Still the room that holds all of my belongings :P )

Stop Overcomplicating Fat Loss
Falling off the wagon? Why you can't stick to ANY diet.
Why your progress pics suck!