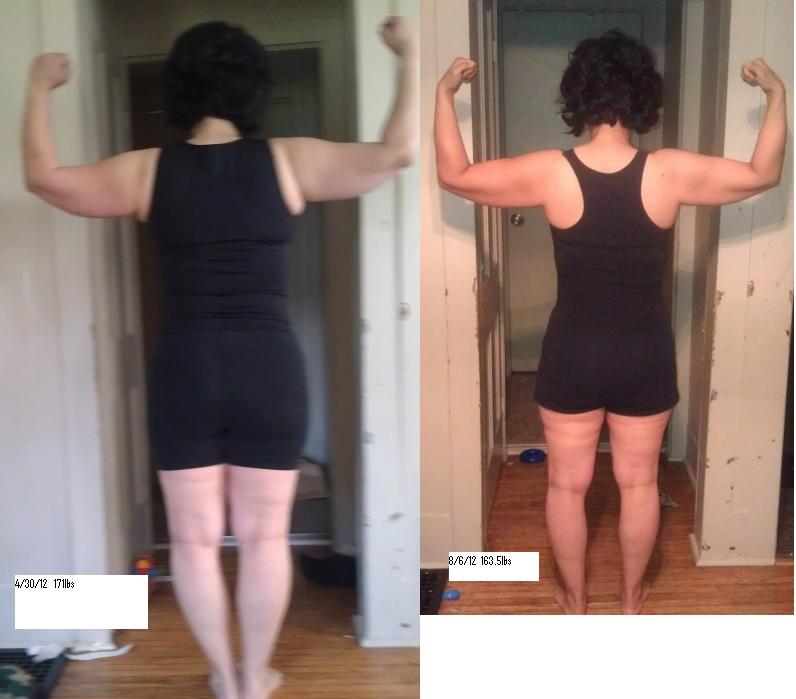 Linda: “This works, this is sustainable, and this is now my life!” 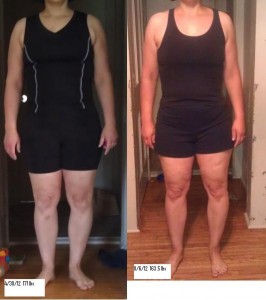 Since I haven’t hit my goal size I am not going to give my full journey yet.  I will just start with this past year, once I feel I am at maintenance I will give my whole story.

In December of this past year, 6 months after having baby number 6, I was heavier than I had ever been without being pregnant. I weighed in at 205 pounds, which is a lot for my small/medium 5’ 5.5” frame.  I had always made it down to at least 180 after giving birth but I think my age and our move did me in.

I decided I had to do something about it, once again.  I am the master of losing weight, which is only because I have not mastered maintaining my weight.  I grew up with a pretty high metabolism, so once I started adding physical movement in and cutting my calories I would lose, and I would lose fast.

About two weeks into this journey, I was stressing too much and my heart was not in it at all, even though I was down 6 pounds. It was Christmas time and I just didn’t want the added stress, so I stopped worrying about it.

In January I had to go to the ER, I was diagnosed with Diverticulitis.  Also blood work came back and it was showing some damage to my liver.  The high number had something to do about liver disease caused by obesity.  Great, just what I needed to hear. 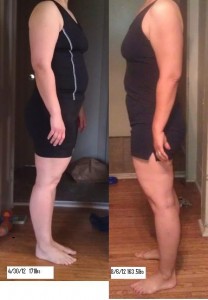 I finally decided that it was time to get back into shape.  I had had success doing a high fiber regimen so decided I would go that route again.  Through some great friends I found MFP and logged everything in.  MFP gave me a number 1240 for my calorie intake, and I about died.  There was no way on this earth I would eat that low.  I had, before this baby, been doing P90X and eating about 1650-1850 calories a day.  Of course it was way before I knew about eating back calories.  So I was probably netting way below my BMR.

For about 4 months I was battling with the numbers, never consistent.  I went back and forth with netting my 1240 to netting more than that, to not eating my calories back, to eating my calories back.  I was a mess.  Having OCD I could never stop messing with my numbers, which turns out to be a good thing.  I started praying to be guided to something that would last, something that I wouldn’t be waiting to be over so I could go back to “normal.”  During that time I found the book NROLFW, it talked about eating more not less.  I was so excited.  Then I did my calculations and it seemed, since I was over 40, that the new calorie allotment was still kind of low.  I was a little confused, at the same time I found EM2WL.  Was guided to great calculators and the rest is history.

On April 30, 2012 I started NROLFW and was eating at my TDEE.  After about 2 weeks I realized that it was still too low and with great advice and support upped my calories.  So I was eating 2600 calories, 300 added in for breastfeeding.  My milk supply was amazing, my energy for my workouts was fantastic, and I finally understood the need of protein. 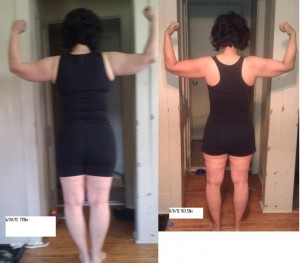 After my first stage I had lost 5.5 pounds, which means I probably was eating below TDEE.  When I started the second stage I took my TDEE and did a 15% cut, after starving for a week I upped my calories so I was only at a 10% cut.  I decided not to step on the scale for the month of July, which was really hard for my OCD to cope with.

At the end of July I had lost 2 pounds, so a total of 7.5 pounds lost since April 30th.  Though as you can see by my pictures, it looks like I lost a whole lot more!!!

This works, this is sustainable, and this is now my life!!!  Thank you Lucia and Kiki!!

Getting Back to Basics - Cindy's Journey
Kelsey: "Focusing on photos, not the scale" - recovery from an eating disorder
50 pounds lighter! ~Angela's Testimonial and Lifestyle Change