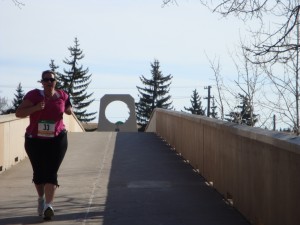 My name is Kelly, and I have been overweight my entire life. As a child, I can remember my grandmother offering me a dollar for every pound I lost. My mother offering me contact lenses instead of glasses to lose the weight. I can even remember in grade 7, a very cruel man at a horse stable, watching me struggle to get on a horse during a class trip, who decided to yell out for all to hear, “Jesus, how much do you weight? 200 pounds?? You might kill my horse!” It was probably one of the most embarrassing moments of my life, and unfortunately something still ingrained in my head.

I have never ridden a horse since.

I spent the better part of my young life overweight, unhealthy, unhappy and miserable. I had my wake up call when I was 24 years old.  I woke up in the middle of the night with heart palpitations, sweating and short of breath. I knew this was my sign to change my life and get healthy, once and for all.  It was shortly after, a Weight Watchers At Work program began in my office, and I immediately signed up. Over the next 5 years, I slowly lost the weight. By the time my wedding hit in the spring of 2007, I had lost 102 pounds, going from a size 24 to a size 14. I was very much the beautiful bride, something I am very proud to look back on and know how hard I worked for it. True, I was not yet at goal, but I was something I had never been before.. Average size.  I still had about 30 pounds left to lose according to the scale, and I was hoping to get a bit more of it off before we took the plunge and had kids.

5 months later, I was pregnant with our first child. It was like a light switch went off in my head and I turned off the weight loss capabilities and just slacked on the eating. Now granted, I was not eating poorly overall, but I was eating more than I had been allowed on Weight Watchers. During the course of my pregnancy I had gained 70 pounds back – Something that shamed me, made me feel horrible and ugly once more and made me hate the last few weeks of my pregnancy.  After the birth of my first, I hit that 6 week mark and immediately went back to the WW program. I spent the next 18 months trying desperately to lose the baby weight. I managed to get to about 25 pounds away from my pre-pregnancy weight before I was pregnant again. This time I paid more attention to my eating, continued working out at the gym and watching everything. I had managed to make it almost half way through the pregnancy, before I had to stop going to the gym. Over the last 20 weeks of my pregnancy, I still somehow managed to gain about 45 pounds. It just seemed to be even eating a little bit more than I was used to, was causing me huge gains.

Needless to say, It wouldn't be until almost 18 months after my second child's birth, that I finally understood WHY I struggled so much to keep the weight off during  pregnancy, and why it has been so hard to get it off a second and third time.

In January of 2012, I decided to try the C25K program as a way to hopefully boost my fledgling weight loss efforts. I was once again back at Weight Watchers and still could not get anywhere on the weight loss front. In 8 weeks I went from running barely 30 seconds, to running a full 5k (40 mins for me:)) It was probably one of the few things as an adult I was proud I had done for myself. I never wanted to be a runner, but I wanted to prove to myself I could do it. And now I do enjoy it. During my training, I was barely eating my weekly flex points, let alone the 54 activity points I was earning in a week. I could always hear my leader in the back of my head saying I needed to eat more, but for some reason, I could never connect it in my brain. It was during this time that I realized I had an account on MFP, and decided to give it another try, as another way of tracking my food, get a different outlook on things.

In my first week looking through the forums, I came across the Eat More to Weigh Less Group. I was curious how they could eat so much and still lose the weight, so I decided to read the posts they had listed, ask questions and get a different look on weight loss. I think it took me a few days to convince myself I needed to eat more, even though I knew on WW, I was not eating enough. I began by taking my WW tracker and plugged a week into MFP and see what the calories were like. I was SHOCKED to see I was barely eating about 1400 calories a day. I found the online calculators and was even more shocked to see that my body needed at least 1800 calories, just to pump blood in my body.  I immediately started eating at my BMR level and saw the scale drop. Over the course of the next few weeks, I read and re-read and re-read the stickies, asked questions and started to trust the process. I jumped up to my 15% cut value and once again saw the scale change for me. It was here that my body decided it wasn't quite ready to forgive me for my past eating issues. I spent about 6 weeks trying to understand why I was stalling out and nothing was happening. Then I read about the Metabolism Reset.

The metabolism reset meant taking a break from losing weight, allowing myself to eat and gain strength, and then start making a cut down the road. It terrified me! I have been in weight loss mode for almost 10 years. I knew nothing about stopping that process. Even while pregnant, all I could think about was how the heck was I going to lose the weight? Then it hit me.

I had been in a very low calorie diet for the better part of ten years.  No wonder my body wasn't convinced I was feeding it enough.  No wonder my body wasn't allowing the weight to come off when I breastfed my children, and beyond. No wonder I couldn't get the scale to cooperate in my favor at all.  Once I finally allowed myself to let go, and trust the process, I was finally able to start to heal myself.

The metabolism reset itself has been filled with many ups and downs. I started off very skeptical.  How was eating even more supposed to help me lose the weight?? But that first week I jumped to my TDEE value, I lost 3 pounds. Over the course of the next few weeks, those pounds did come back and stabilized, but I realized, it didn't bother me. I knew now that I could eat literally DOUBLE the amount of food I was eating almost 4 months ago, and basically stay the same weight. I originally planned to only go to 4 weeks on the reset, but after hitting the wall at this point, I knew I needed to give it a full 8 in order to heal my mind more than my body.

Here I am. Currently on my final week of my Metabolism Reset and rarin' to go. In the last 4 months of fueling my body I have had significant changes in my life and appearance for the better. My hair stopped falling out. I sleep better. I am not as grumpy or angry with others. I started lifting weights and can lift things I never thought I could do. I can do REAL pushups!!! I smile more. I am happier. I feel better about my life.  I can't say the cutting process will be easy, but I am looking forward to the changes coming my way.   But no matter what, I now know I will never eat so little calories again. I deserve to feel this good. I deserve to be happy, and I deserve to never have to utter the word “Diet” again.

I hope the next few months will show some wonderful results!

Bria - "The science is there, you only need faith to reach your goals..."
Empress Ichel: My mum always wanted to tell this story...
Gaining muscle and losing fat! - Melanie's update