Periodization Training – What is the STS “pyramid”

Q: Why do you often recommend “pyramiding” STS?

A:  I'd often considered it, because it's the way that I used to train (before I ever considered working out to a DVD, lol).  Heavy weight, low reps to “bulk“, then lower weight, higher reps to “cut.”  The first time that I did STS, I (naively) assumed that once I did it the prescribed way, then I'd probably do it backwards from then on, because it made more sense to me.  But once I did the program, I realized the genius of how its set up…  Periodization Training.  Because you need the endurance built up in the smaller muscles (from Meso 1 & 2) to be able to support the heavier weight load on the bigger muscles in Meso 3. So having done it a few times, I came to the conclusion that I could probably get really good results by doing it in more of a pyramid, meaning M1,2,3,2,1 that way I would still get the bulk/cut res 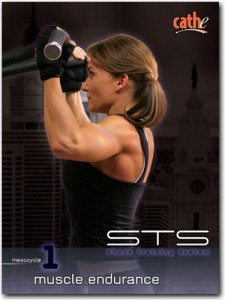 ults that I love, but not take away from the program the benefits that it has to offer. I know, personally, I'm able to lift heavier in M3 because of M1 & 2, so I'm not sure I'd want the trade-off. My 1RM changes from M1-3, so I actually see strength gains that I've never seen in all my years of training really heavy (M3 style most of the time) in just a 4-wk period of lifting really heavy. After lifting so heavy, I can also see the benefits of going back down to a high rep rotation afterward (which I usually do)..

Also, pyramiding in the cooler months, allows me to naturally take advantage of the heavier eating (“bulk factor”) of the winter months, if timed properly.  It allows for a natural “bulk/cut” eating progression as well.  So by starting in say, October, I'm still at a pretty high rep phase, and my eating is usually still pretty good.  The lower rep/higher weight Meso's will fall toward the end of  Nov- end of Feb higher cal months (including recovery weeks) .  Then by March, I'm more than ready to start gradually turning the food down a notch, and Meso 1 is a welcome addition to the lighter eating.  It helps keep the “phase eating” to a minimal thinking level, because I'm already doing it by the nature of the season.  This gives me a solid three months of bulking (Meso's 2,3,2), and three to four months is usually about as much as I can (mentally) stand.

If this is your first time, try it one time through, as written, and decide what works best for you.

Q: So,  when you start to pyramid down do you start at the end of M2 and work to the beginning or just do M2 the way it's laid out?

A: I get that question a lot, actually. I typically tell people that they could do it either way (because I've had people tell me, when I explain my reasoning for the way that I'll be doing it, that it's too confusing, lol, and they'd just prefer to pop in each disc in reverse order- so to each his own).

But I start with the beginning disc of each Meso, and here's my reasoning: in M2,  the rep amount (8-12) doesn't change, only the 1RM %, which is what feeds the hypertrophy/muscle growth development. So, because the system is set up this way, why not take advantage of it, again? Now if, say the reps in the first disc were at 12, the next one at 10, and then 8, etc (as in M3), I may have a different stance, but seeing as they don't

change, I don't mind increasing my 1RM % and staying at the same rep amt. As for M1, the same changes apply, because of the progression that you experience going through the Meso in designed order, I think you'd maximize your results.

big example here is that, for instance in Disc 1 you do about 136 pushups, while in Disc 3 you're doing 182. This is a big jump, and in my opinion would be better suited at the end of your pyramid, so that you've, again, worked your way up to it. Many people also often move to endurance/circuit style work after doing STS, and complain that they feel “weaker” when they do workouts like Cathe's Gym Styles

, or similar. I think that doing M1 using its natural progression will help alleviate that, as well as keep them challenged until the end of the pyramid…