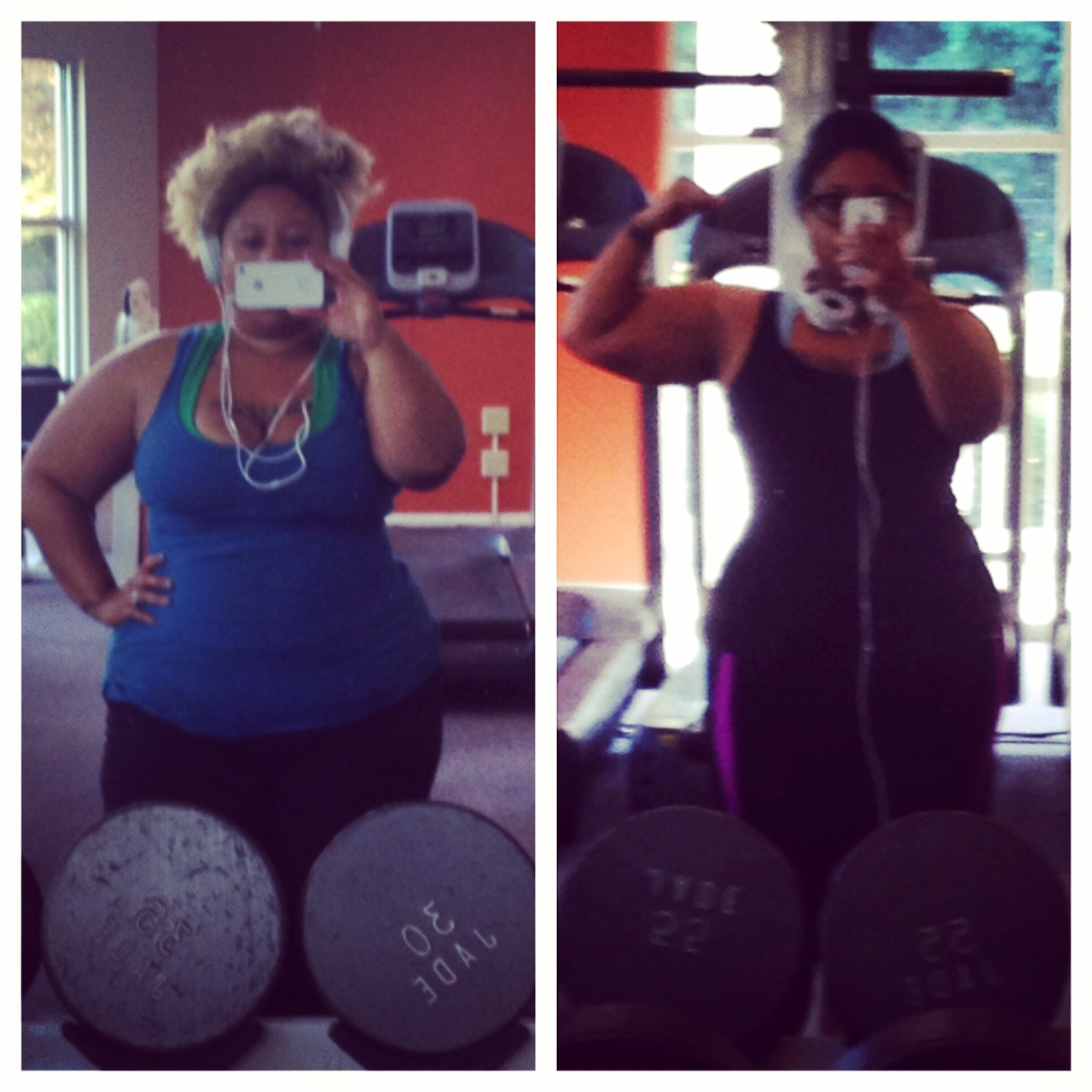 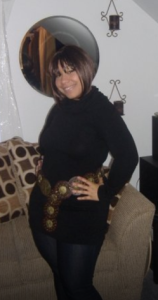 My name is Jeannetta! I have no idea where to start my transformation story, and I can't give exact times and dates. What I can tell you is that finding this group on MFP is the best thing that could have ever happened to me. So, I think I'll start on the topic of MFP.

I'd done MFP haphazardly in my mid 20's. I'd always had weight issues.  At a very young age, I was considered chunky. I was always bigger than my peers. In retrospect, I ate horribly as a child and teenager. The truth is, I didn't know any better.  We ate plenty of junk. Canned foods, fried foods, refined carbs, you name it.  I don't remember a balance of foods. Everything I learned about food and proper eating habits came to me in my early 20's. At that point in time, I came home from college tipping the scales way over 200 lbs and about a size 22. I had horrible acne. I couldn't fit into the latest fashions. I was fat, and I was over it.

When I moved home (Chicago) two things changed. I walked a hundred percent more. I took public transpo everywhere. That meant walking to and from the bus/L stops, walking from those stops to wherever I was going. Then back around again. Running to those stops sometimes. I mean, to go up and down L stairs and ramps, just commuting I had to be climbing a minimum of 13 flights of stairs in a day. If I wanted to go to the corner store/ bar/ most restaurants, I walked. 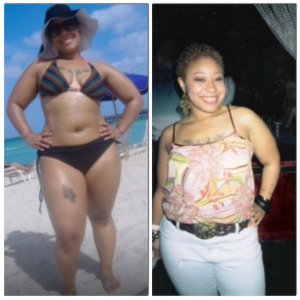 The second thing that changed were my eating habits. I was eating better and didn't technically realize it until later. I had more variety in my diet because of our food culture in Chicago (fresh foods, etc). One year later, I weighed in out of curiosity one day. My pants were falling off. I'd lost 30 lbs. That's when I made the connection between activity and food.  Soon after the weigh in, I went and got a gym membership. I not only was doing my daily commute walking, I was doing an hour of interval sprints or the elliptical, and weights maybe twice a week. I’d also started dabbling with that 1200 calorie number on MFP. Cleanses, psyllium tablets, senna tablets, and green tea became a huge part of my diet. I ate but was very restrictive. I was one of those, I don't eat this and that people, but in private would max a pint of Hagen Daz half the fat vanilla ice cream. I would then justify it by the all the activity, and all the chicken, salmon, broccoli, and sweet potatoes one would enjoy. I would feel guilty for eating out with my girls. When I look back, I had an ED like a mug. I'd lost 60+ pounds, but was obsessed with losing more and getting smaller.

It became harder and harder to maintain. Even though I was doing all the “right” things. The moment I would take a break from working out, I swear 10 lbs would show up so quick!!!!! Even still, I maintained the weight loss, give or take the ten lbs, for almost four years. When I look back, my actions were crazy.  I’d started eating more fresh foods, and less prepared/processed foods, which was great, but that all came with binges. 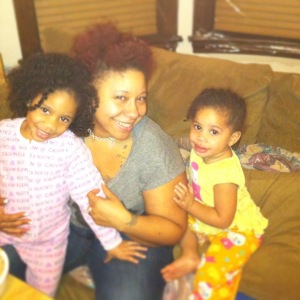 Here I am, covering myself with my children’s bodies.

I got pregnant, and had two babies between 2008 and 2010. Yeah I know, my lifestyle changed. I began driving everywhere because I didn't want to be on public transpo with two kids under two. I ate when I could. I had very little time to work out. The weight piiiiiiled on. I cried and cried. I was miserable. I didn't want to take pictures. I didn't want to be intimate with my husband. I was tired all the time. Depressed. Ashamed. I became the mom who let herself go. I’d promised myself I’d never be overweight again, and there I was, fat and ashamed with no self-love —constantly feeling sorry for myself.

My husband, he got me right together one day. He said to me, “I love you no matter how big or small you are, but I am soooo tired of you crying about it. If you want to change it, I'll take the kids to school so you can get up and work out”. I started working out at home in the basement with a friend of mine to a Beach Body program that was sooooo fun!  I was burning like 7-800 cals a session. But, I was also following a 1200 calorie schedule. I wasn't losing a lb! I did feel better cardiovascular wise, but I was Hangry and I wasn't losing any weight!  That was the day I decided to utilize MFP to its fullest potential. I was going to go through profiles, see who was the fittest in their pictures and friend them. 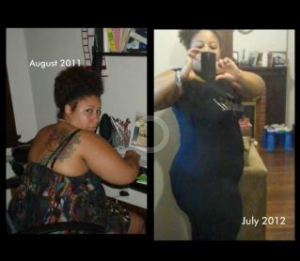 That's how I found Lucia. Call it luck or whatever, but I really believe I found her by the grace and mercy of The Lord. I'd started down the supplement trail again. I was doing the BB shake, protein shakes, green tea extract, enzymes, etc! I really, I mean in my gut knew I was not supposed to be taking all this crap. I was desperate again. Upon stumbling on her profile, I remember admiring her gun show. I remember doing a double read of her “About Me”. I remember reading she ate over 2500 calories a day. I remember looking back at her picture and thinking WTF? She is LYING!!! I remember going to her diary and reading her log, and my mouth dropping open. I remember being confused. So I friended her, I started going through her friends list and noticing all the EM2WL peeps, and I went on to friend others. I remember sending her the most desperate message. All I remember from that reply was metabolism reset, and Scooby’s Calculator. That's when the research began. I felt bamboozled. All these years of starvation and excess cardio???? Even though I thought these ideas were crazy, you know, like the idea of EATING. I done everything else crazy, so I took my cals up from 1200 to 2500 in one day. By the end of the week, I'd lost 9lbs. It wasn't a great 2500 calories. I ate whatever I wanted for about six months. I leveled out at about a 15 lb loss over the next year and a half. 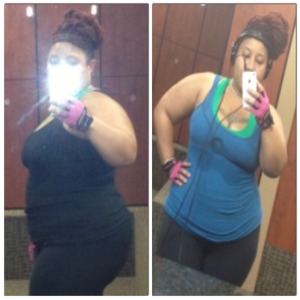 I was still doing a massive amount of cardio and very little lifting. I'd eased up on the supps. Our family moved to Georgia. I didn't work for 6 months. I worked out an hour a day, but was sedentary the rest of the day.  I was still eating 2500 or more cals, not making adjustments for my activity levels. I gained 30 lbs.

I followed a few other eating more groups and found that weight lifting, building your metabolism, moderation, and eating for your individual activity levels were all these groups had in common. By this time though, I’d started feeling really crummy. I was tired all the time, depressed/anxious, low libido, bloating, constipation, rapid stomach fat gain etc. I had a laundry list of things going on. I'd started cutting cals slowly, cutting some of my cardio and replacing with weight training like I'd learned from the groups, and eating moderately, but even still, I wasn't losing, and I wasn't physically feeling well. I went to the doctor. I found out I was insulin resistant. Yep, I was on my way to having diabetes. I sigh even typing this. I never thought I'd be here. I had a cry fest for a couple of days, mostly because my doctor prescribed me the Atkins or South Beach DIET. I was so over diets at this point. I'd been on a diet my whole adult life. I did not want to go on a DIET. I was tired of restricting. I was at a place where I’d started to accept my body for the way it was, and appreciate what it could do. And now, the doctor wants me to go on another restrictive diet. A diet I knew I would fail miserably at, again. I'd already been on both previously and hated every minute of it. 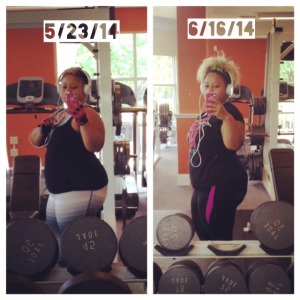 But I'm a resourceful old bird. I am. I wasn't going to be defeated by this. I refused the negative thoughts and started to claim my victory. I headed straight to the diabetes association website. This is where I learned the words glycemic index. I learned how foods effect your insulin, and how insulin contributes to fat loss and gain. I'd already won just by having this information. I was ready. After studying for a few days, I'd found that the damage had already been done to my cells, and while I could become less resistant, there was no science to prove you could reverse the damage to your cells. There was overwhelming science that backed the fact that you could control your insulin levels and keep them normal by the foods you eat. Those foods are medium to low glycemic index foods.  The best part, was that I could still have carbs. What? Even carbs high on the glycemic index could be eaten sparingly.

I made the commitment to a total lifestyle change. Well really I didn't have a choice, I could choose to change or live with a disease I didn't want. So, I incorporated more foods low to medium on the index, weight training five days, and cardio 2-3 days for no more than 30 minutes. I also try not to be so sedentary during the day. I don't count calories anymore. I eat when I'm hungry and when I'm full I stop. I drink plenty of water, and get my rest.   The glycemic index has been the way for me to get my insulin levels under control. I was able to get my numbers back into normal range without the use of diabetes meds. What's even crazier is that, the moment I got my insulin under control, the weight started flying off. And guess what? I'm not starving anymore. 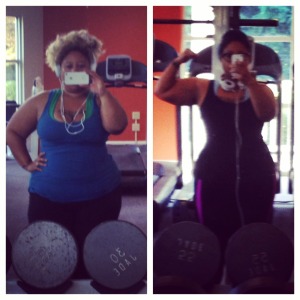 I'm nowhere near done, but I am on my way.  As of four weeks ago I was down 14 lbs, I'm due to go to the doctor this week. I'm averaging about 5-6 lbs a month as far as loss. I'm getting stronger with every lifting session, and I increase my weight every two weeks.  I super set a lot, and lift with intensity.

Hang in there! Listen to your body. If you need help, see a physician. But most of all, don't give up on yourself. Be your biggest cheerleader and your biggest competition. If I can overcome, I know you can too! I hope this helps someone. My story is a “to be continued”.