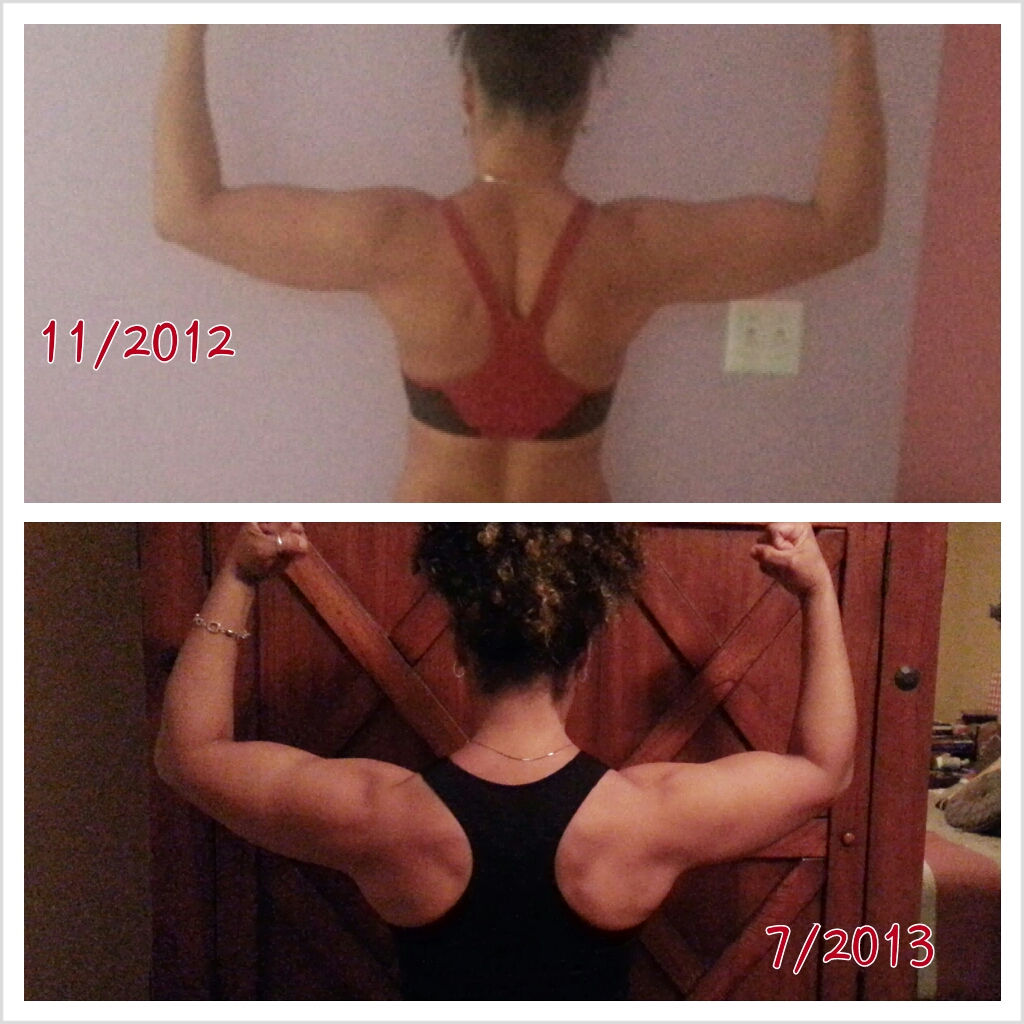 Dealing with obstacles and setbacks (a story of adrenal fatigue) 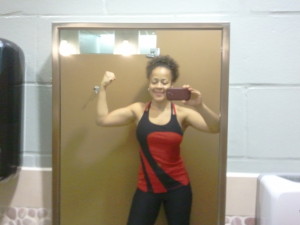 Before the drama began – loving life

Well this has been a long time coming.  I've been meaning to sit down and put all of what's been happening with me for the last year, since my transformation story, on paper.  So much has transpired I'm trying to decide exactly where I should begin.

Ok, I'll start from July of last year, I went to Jamaica to celebrate my bff's 40th and had an absolute blast!  I was at the tail end of my metabolic reset, in which, I had only gained four pounds.  I totally enjoyed all the fine delicacies and didn't count a thing.  I was on vacation, loving every minute of it and I vowed I would never ever ever diet on vacation again.  I know I ate a surplus some days, the food was amazing and I was determined to try everything.  I got back and had gained all of ZERO pounds.  WHAT????  So back to Cathe STS Meso 3 and over the rest of the summer I was lifting heavy and eating at cut. 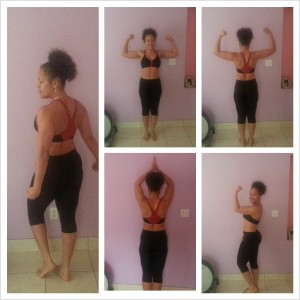 I noticed the end of September, my weight started creeping up slowly.  Since I was lifting heavy and eating right, I tried not to become concerned.  Well, my son transitioned to wearing a pump to manage his diabetes, and I didn't have one full nights sleep for over three weeks.  I had to get up every three hours to check his blood sugar.  You talk about exhausted… 9pm, 12am, 3am, 6am every single night.  By the top of November I had an extra 20lbs and I couldn't believe how I'd gone from toned and svelte to thick and fatty.  I just knew it had to be my thyroid, and though my numbers looked fine, I decided to switch from synthetic to a natural thyroid replacement pill.  My numbers plummeted and though in cut mode the weight didn't budge.  I was back to my after baby weight and all the muscles I was so proud of, seemed to disappear into oblivion.  You talk about devastated…

I felt everything people would write me about…frustrated, scared, anxious, and obsessed with that scale.  I couldn't understand how I went from nicely toned with just a wee bit of fat to shed, to a thick girl with layers of adipose tissue that seemed here stay!  During the next few months the doctor and I worked on getting my thyroid level right.  Though the temptation was there to slash calories drastically, I absolutely refused.  I ate at a small deficit 10-15% and took off an extra 200 to account for the low thyroid.  Lifting and cutting and still nothing moved much.  Well the cutting business, wore on my nerves, so back to TDEE I went.  I figured if I wasn't losing or gaining at cut or TDEE then why not enjoy my food??? 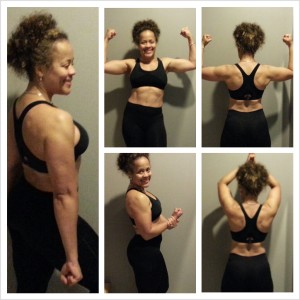 So, I believe it was March or April, I'm still looking for answers since my thyroid numbers were now level.  Goodness, though I'd shed a few pounds, I was stuck at 170lbishhhhhhh.  During my hunt for some type of viable explanation, I found a Sweaty Betties vid, on adrenal fatigue.  Things started to make sense.  Severe stress, lack of sleep, growing older can all contribute to causing adrenal fatigue.  Lord knows I was sleep deprived, and the start of the gain was when I was getting up all through the night….ahhhhh haaaaaaaa!  Light bulb blew up…lol… I mean for weeks no sleep and I was absolutely stressed in general with family issues, plus the strain of my full time job and my 2nd job that I love, EM2WL.  Well, I read and watched more vids and started the supplementation suggested, but, I was still having sleeping issues.  I found that my free T3 was a bit too high so we backed down on the thyroid med a little bit.

Ok, so now I'm sleeping ok, thyroid numbers are good, I'm lifting heavy, I invested in the Body Media Fit (boy did I underestimate my numbers, but that's for another blog, in time…lol), eating at small cut, starting to see some fat loss but still stuck in my big clothes.  So, I decided to take some pictures and bam, I see some muscular maturity…more dense muscle than when I was at 154lbs. Yes still almost 20lbs heavier but I could see that all the gain wasn't just lumpy fat, but that there was some nice growth that transpired unbeknownst to me.  I got excited and then the brain starts saying over and over…”now it's time to shed all the excess fat so you can start wearing some of your smaller stuff…aren't you sick of wearing the same three jeans?”  Oh my gosh, I then became obsessed about the numbers…YES!!!  Exactly what I type a few times a day to others, NOT to do! 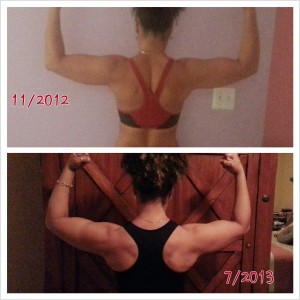 After whining to the Kikster one day, I realized, I was causing myself unnecessary stress and I said that is it!  No more scale…No more logging… and NEW CLOTHES BABY!  Oh yes, the sausage queen went into retirement.  I hit the outlets and bought nice fitting jeans.  Matter of fact, I went all out and bought tops too, even though my top size didn't change, hey, I went for the gusto.  Feeling good again because a sausage I was not any longer…lol.  My plan was to weigh in after a month, but now way over a month later, I have no desire to step on the scale.  Listen, during my no scale or logging time..whew, I haven't been stressed about a single number.  And logging for over a year has taught me how to hit numbers,macros, blah blah.  So no sweat there either. 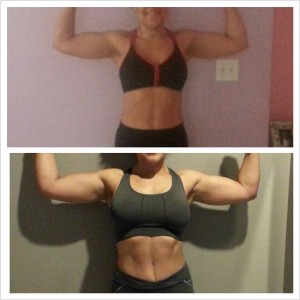 What's been happening since?  All the jeans I bought are looser…tehehe.  The ones I'm wearing today were a bit snug when I bought it.  I could hear Kiki's voice saying, ” Now the purpose of your shopping trip is to “desausage”…why are you going to buy those sausage makers?”  LOL.  I know I should have left them right there, but they were on too good of a sale.  Oh so glad to report they fit smashingly today.  Also, the break from all the tracking has allowed me to shift my focus to physical goals.  I've always wanted to dead lift and squat my weight.  My lift sessions have gone to another level.  Not worrying about all the tracking keeps me nice and mellow.  I also decided to stop dwelling and focusing on the negatives…I wish I looked like this, look at that lump, why can't I see a striation here or there yet…blah, blah, and negative blah.  Now, I congratulate myself on new feats tackled and I point out the positive changes I see in my friend, the mirror.

Ok, ok, ok, so I can't tell you I've lost x,y, or z, BUT, I can tell you I've lost a half inch off my hips, waist, and thighs.  I can say I surpassed my dead lift goal, met the squat goal, and I'm blowing past other personal records during my lift sessions.  I can also see a nice progression which others have noticed too.  I have also conquered the hardest part of the journey…the mental voyage.  And lastly, I can say I'm enjoying the stress-free non-tracking lifestyle and appreciating every positive thought I now have about me:-)