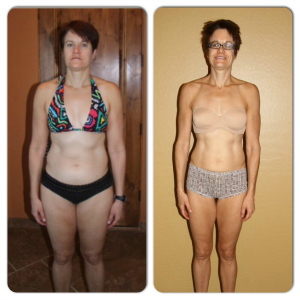 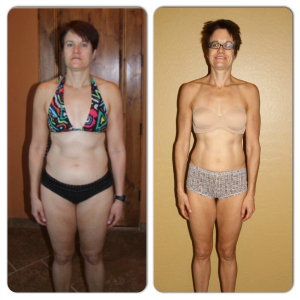 Kiki has been bugging me for a while now to write about my weight loss and fitness journey, so here I am finally getting the courage up to writing it. I say courage because in the past year I have come to realize quite a few things about myself that I was ashamed about for a long time and have finally come to be able to face the truth.  Yes, I too (as many women do), suffer from binge eating disorder (BED), but let me start at the beginning of my journey, because I couldn't always admit, or understood that this was going on.

Upon turning 40 (4.5 years ago), I was very unhappy with my body and weight and the fact that hiking was getting hard for me. I live in Arizona and hiking is one of my husband and my passions, especially at the Grand Canyon.  Well, it was a trip to the canyon that finally snapped me into reality and made me make the decision to do something about my weight that had ballooned to 185.  I am 5’7” and 195 was the highest weight that I had gotten to in the past, so I was closing in on that number again!  I decided to give online weight watchers a try and had (what I thought) was great success, after all I dropped 45 pounds in about 4 months!  Of course, I quickly hit a plateau and continued to increase my exercise, while sticking to the very low “points” that weight watchers was allowing me; rarely to never eating back my exercise calories that continued to increase with my cardio/calorie burn obsession! 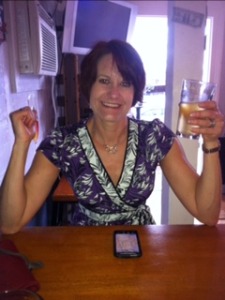 After about a year of weight watchers, I decided not to renew my contract and to switch over to MFP, where I discovered that there was a whole group of Cathe Friedrich obsessed women out there. For those of you unfamiliar with Cathe, she is a workout DVD genius and my guru!  I had been lifting weights with her DVD’s along with her cardio DVD’s during the whole weight watchers process.  It was a breath of fresh air to meet all of these women with the same workout commitment that I had.  Well, long story short, I got hooked up with Kiki through other mutual Cathe/MFP ladies and started to read her blog posts and watched her YouTube videos.  This is where I first got hooked up with EM2WL and started to realize that the health industry has steered us women in the wrong direction when it comes to “losing” weight.

After many conversations with Kiki, I was convinced and finally understood that eating really low restricted calories was always going to set someone up for failure, especially when it comes to losing weight and keeping it off and that the healthiest route was to eat to fuel your body and to lift weights, heavy weights! As I mentioned, I had been lifting weights all this time, but never understood why I was never able to make any progress in muscle development and that I had actually lost much of my muscle. Oh, and I should mention that during this plateau, I didn't understand why every time I would feel like I made some progress I would fall into a binge tailspin.  For 9 months, it was 2 steps forward and 1 huge binge step back.  Every time this would happen I would absolutely loath myself and shame myself etc, but never understanding that it was partly my body’s way of telling me to “feed me”! (Of course there are also psychological reasons for the binging as well).

I finally let her convince me to do a metabolism reset after being at the plateau for a good 9-12 months and losing and gaining the same 5#. Silly me, I thought that I would reset my metabolism for 6 weeks and then start cutting again.  I didn't understand why after that 6 weeks I had gained a good 10# back and why when I started cutting it didn't just fall right off!?  After more conversations with Kiki and more research, she finally got me to understand that it wasn’t a number that I could assign to my reset, that it could and would take time, quite possibly a LONG time.  She also convinced me to join a group of ladies who were starting STS (a 3-6 month Cathe weight lifting program), while bulking (eating above calorie requirement).  She did warn me that I would gain weight and boy did I.  I gained about 20# back, bringing me back to around 160.  I was a little scared, as was my husband starting this process but new it was going to be for my good.  After STS was finished I decided to try a cut.  I lost some of that weight, but I could tell that my metabolism still wasn’t healed, so I started to eat at what I thought was maintenance and stayed there for a long time. 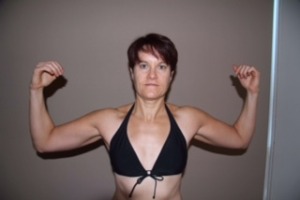 I should mention, that after I lost all the weight with weight watchers, I told my husband that I thought I wanted to someday compete in a figure competition. I had an unwritten goal of competing before I was 45.  Well, I talked about this goal for about 4 years and finally, a (very devout Christian) friend of mine finally pointed out that maybe the fact that I kept bringing this topic up every few months, that maybe, just maybe God was directing me to actually go for my goal.  I should mention that within all this time of weight loss and resets, I was born again (which is why she felt it was God calling me to this goal, for whatever reason).  We both figured the reason was not because he wanted me to compete, but one much more deeply.

This conversation occurred in December of 2013 and around the same time, my husband got fed up with my talk and said that I needed to just do it! After much discussion with him and other women who had competed and a TON of prayer, God led me to an online trainer who came highly recommended and who was also a Christian.  I signed a yearlong contract that began on January 27 2014 that included a nutrition and training plan, with the intention of competing on November 1, 2014.  You are probably wondering how did it go!?  It didn’t.

After starting with my trainer, I quickly started seeing results, not only in fat loss, but overall improvement in my cardio ability as well as muscle development. I couldn't and still can’t believe the amount of muscle that I have been able to develop.  So why did I not compete?  As I said, I felt God had me on this journey for a much bigger reason than simply competing and as it turned out, it has been a journey of healing and learning about nutrition and coming to a place where I can finally admit that I do suffer from BED.  Do I still struggle with BED?  Constantly!  Have I binged during this new goal phase of my life?  Sadly yes, but with God’s help I am working on it and have only had 2 major occurrences in the last 9 months, which is a great improvement from binging every few weeks. 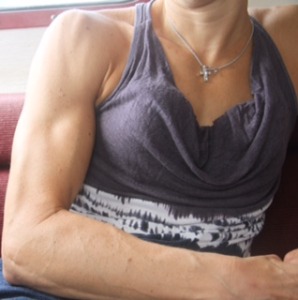 So, the reason I didn’t compete? Twelve weeks out from the competition date, when true contest prep would normally take place, I got a response from my trainer that I was not expecting.  She felt that with my BED issues, that she could not get me to competition readiness without restricting my calories too much and with my ED, she knew it was the wrong thing to do.  After much discussion with my husband, we both agreed that this is why I hired her and I should heed her advice.

We have now moved into a muscle building phase and the new goal is to compete in spring of 2015 and if I am still not ready, than winter 2015. Needless to say, I now know this is a journey of not only physical health, but mental and spiritual as well and I will take as long as I need to get to the point of competing.  My mindset has changed from “I just want to be able to say that I did it”, to “I did it and I won!”

I guess I should add my stats for those of you who are wondering (I started tracking in July of 2012 and unfortunately don’t have pictures for the earlier dates): 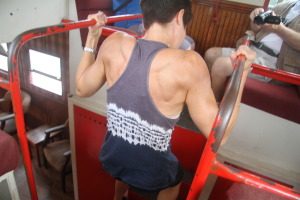