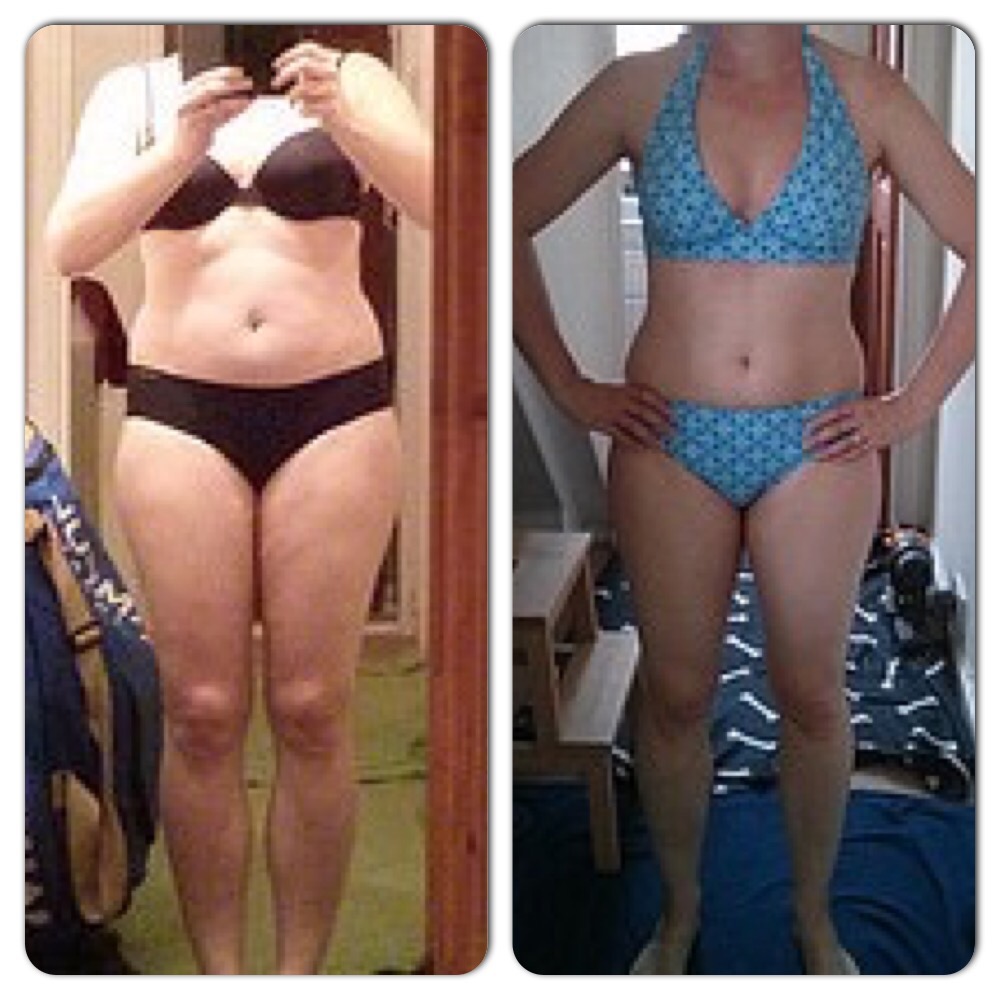 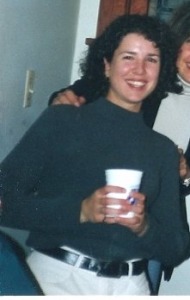 Hi.  I'm Liane and I'm one year into a plan. I was never good at the small details but great at the big picture.  This is why I came up with a two year plan but ended up flying by the seat of my pants and still, to some extent, am.  But let me start at the beginning (see, flying by seat of pants).

When I was in high school, I was a serious athlete.  I played three seasons of sport (field hockey, basketball and softball) and had the body that went with this.  In the 80s, the muscular with some body fat body wasn't something to have as a teen (then again, it seems to never have been the body to have).  I thought my butt was too large, my tummy too large and I hated my muscular calves.  I wanted my best friend's tall lithe body.  I look back on those pictures and wish I had that body again!  I was so cute and fit (my tummy was just lightly rounded but I couldn't see it).  BUT, I didn't diet.  It wasn't big in my group of friends who all seemed to just eat.

The summer after I graduated I went and worked as a pool-side cocktail waitress in a bathing suit at a resort.  Talk about horrible.  I was a late bloomer and working with these college women who were much more developed.  At the same time I started drinking alcohol and eating to deal with the emotions I was feeling, being away from home.  I gained 20 lbs in that summer.  Yup, the freshmen 15+ before even becoming a university freshmen.  Ugh.  I began to play Division 1 field hockey at university and along with eating less meat and more veg, I lost the entire 20 lbs during that year.  I felt good about myself.  I hadn't starved myself but cut out a few small things.  And then my sophomore year came and a new coach.  She made us all get our body fat taken by caliper.  I was told that at 22%, I would have to lose a lot of weight – I was fat.  Yup, not just asking me to eat a bit less to get a lower body fat percentage but that I was fat and to lose weight.  All my insecurities came back.  And so I began to starve myself.  I probably ate between 800-1000 calories most days, though more on weekends.  As you can imagine, in the next three years I did lose a lot of weight but my hockey performance declined a lot. My coach had ruined me.  But I was skinny. 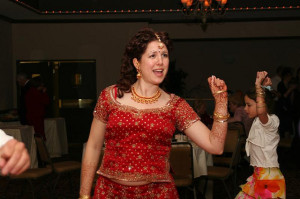 Throughout my 20s, I was constantly trying to keep that very skinny body shape.  I would under eat, workout for hours and smoke.  Yuck. But I was skinny for the most part.

When I wasn't doing these things, my weight would balloon.  And as I got older it got harder to go between heavier and skinnier.  The worst was when I ended up tearing my ACL while playing rugby.  I couldn't exercise for months in the same way and I ate because I was unhappy.  So I gained again.

Up, down, up down, never actually learning how to eat the right way.  But I kept around a decent body weight and I doubt anyone would have ever called me ‘fat' (though I felt that way).  In 2004, I moved to London for a job.  In the first few months, I lost weight despite drinking lots of beer with my new field hockey teammates and felt fantastic at my dad and  stepmom's wedding.  I didn't really eat a lot because I was a bit broke and I was walking everywhere as the transportation was expensive (and I didn't have a paycheck right away).  I then met my to be husband.  He is a born and bred Londoner.  And he loves food.  He was the first guy I met who told me to eat more, that I was too skinny and that he couldn't understand women who ate salads only.  He loved my bum and hoped that I would get curvier. 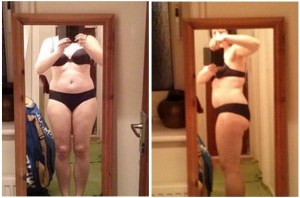 That led to the two of us sharing our love of food and cooking.  He taught me Indian dishes (as that was his background) and I showed him how to barbecue. Over the next couple of years, we both slowly gained weight, though I did more so due to eating his size portions.  I called it my boyfriend weight.  But I was happy.  I didn't even care about losing weight before I got married though I was sad to have a tummy in my wedding pics (Indian style wedding so tummy showed!) Eventually, I actually weighed myself and saw that I was 170 lbs.  Holy cow.   This was by far the heaviest I had been at 5'6″.  I found MFP and lost 20 lbs quite quickly (I put myself in for a 2 lb a week weight loss).  I ate very little, which felt natural to me.  A few years later (and a year ago), I saw pics of myself looking quite fat faced and decided to weight myself. 165.  Darn it.  Gained weight again!  Back to MFP where I quickly lost 5 lbs.

But then I began to read more in the forums.  Some women were posting about eating more, especially as they didn't have a lot of weight to lose, which I didn't.  I wanted to get to 145 minimally, so I went with 1 lb a week.  Lost some weight and then went to 1/2 lb weight loss goals.  I was doing some weight lifting on the machines which made me feel like I was getting a bit stronger.  My input of calories slowly went up to 1900.  And then I just stayed there.  It was frustrating.  I wasn't really losing a lot of weight, but the ladies I friended encouraged me to read more and take my time.  I eventually got to the EM2WL group on MFP and it was there that I finally figured out how to do this.  I didn't want to lose weight only to gain it again.  I was 45, darn it, and I wanted to start eating for my lifestyle while also losing some body fat. 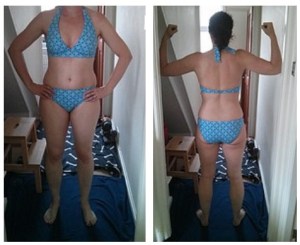 I joined the website forums and began to post.  I started doing Stronglifts 5×5 as it seemed like a great programme. I lost those final few pounds to get to 145 as I was eating more (who knew?) and I decided that I would try to figure out my true TDEE so I could do a healthy cut to get to my final goal weight of 140.

I'm still in the midst of doing this.  I've slowly added 100-200 calories and held at that level for a month at a time.  I've had setbacks such as breaking a rib and getting a major chest infection which has influenced how much and what I could do as workouts.  But I've held strong.  I'm now eating the way I hope to for life – I haven't given up a single food but I'm trying to keep my protein intake a bit higher (to keep my muscles) and watch my portion size.  Amazingly enough, I'm eating almost at dinner some nights what I used to eat all day (around 1200 calories).  I'm still in the midst of figuring out my TDEE (I'm at 2400 calories currently) and once I get to the point where I am gaining weight steadily, then I'll know it's time for a small cut of 10-15%.

I'm one year into my two year plan.  I didn't know how to get to where I was going, but now, I have more of an idea of what I need to do.  I'm no longer really listening to the scale in the same way I used to.  For me, it's a tool to figure out my TDEE but not to figure out if my body is where it needs to be.  I'm using measurements and my mirror as my guides.  I'll never been a fitness model, nor do I want to be one, so I'll always carry a bit more body fat than others.  I want to be able to have pizza and beer while still feeling fit.  I want to still be playing field hockey at age 50 (I'm almost 46 and going strong on a team in London). And, if I live to my 90s like my grandmothers did, I want to be in the best health that I can, with strong bones from lifting and eating well.  Yeah, those are good goals. 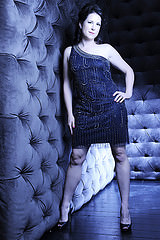